For the character from Call of Duty: Modern Warfare 2, see Raptor.

"Raptor One" is the call-sign of a character featured in Call of Duty: Black Ops Cold War Zombies mode, introduced in the map Die Maschine, and appearing in Firebase Z, Outbreak, Mauer der Toten, and Forsaken. Raptor One is the pilot of the MH-6 Little Bird helicopter that gets any player in and (if exfiltrating or completing a map's Main Quest) out of the map. The only exception to this is Mauer der Toten due to his capture by Omega Group, where this role is instead filled by Lev Kravchenko.

Not much is known about Raptor One's history prior to his work with Requiem. He is regularly tasked with extracting Grigori Weaver's strike team out of outbreak zones following completion of their missions, notably during Operation Cerebrus and Operation Lost Property.

On one occasion, in November 1984, Raptor One, without orders from Requiem senior staff, attempted to extract the strike team after they completed Samantha Maxis' order behind Weaver's back. He would continue to help them again in December 1984, during Operation Excision in which he attempts to extract the team after their failure to secure the Omega Group scientists. However, their helicopter was shot down, leaving the entire team and himself to be captured by Lev Kravchenko.

While remaining in their custody, Raptor One is often subjected to torture by Kravchenko and Gorev. Despite this, he remains loyal to his country and refuses to give up vital information, constantly citing his callsign and military ranking to show his resilience. Eventually, Kravchenko decides to leverage his life as a bargaining chip against the strike team. The strike team is then forced to carry out Omega's mission and take down Aleksandra Valentina, who betrayed the group and unleashed a zombie outbreak in East Berlin for her own agenda. The strike team is successful in their mission, but Kravchenko attempts to betray them at the last minute by commandeering an attack chopper and assaulting them. To Raptor One and the strike team's luck, Weaver has them extracted with Maxis' help, who created a portal to teleport them back to Requiem HQ.

Raptor One would get his wish, as he would be tasked with exfiltrating the strike team at Test Site Anna after their defeat of Omega and the Forsaken. Immediately upon returning to the West, Raptor-One and the strike team were arrested upon landing on orders of the Director for indefinite containment at BLACKSITE 13.

Raptor One flies away from the destroyed Projekt Endstation facility with the Requiem strike team.

Raptor One arrives at Vietnam, as Requiem leaves the village.

Raptor One injured while under the custody of Omega Group.

Raptor One is rescued by Requiem 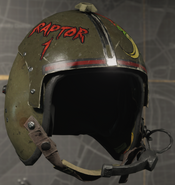