Survive against the limitless waves of the undead.
Recover a piece of the Soul Key.

"Rave in the Redwoods, the next thrilling chapter of the Call of Duty: Infinite Warfare zombies experience, continues the macabre narrative while transporting players into a new decade: the 1990s. Willard Wyler, the enigmatic movie director villain, returns and has trapped the protagonists inside another one of his twisted horror films. The four playable characters from the original story also return, but with fresh, over-the-top roles, as they learn more about Wyler's evil plot while fighting all-new varieties of the undead in an abandoned, lakeside summer camp where zombie ravers have taken over and turned the grounds into a techno-fueled illusion. Rave in the Redwoods is a tense, spooky thrill ride with shocking twists, surprises, and a slew of new Easter eggs for players to discover."
— Description

Rave in the Redwoods is the second Zombies map Call of Duty: Infinite Warfare and part of the Sabotage map pack.[2] The map was released on January 31, 2017 for the PlayStation 4, and on March 2, 2017 for Xbox One and PC. It is set at Bear Lake summer camp, which has been taken over by a massive rave party, and features a new Wonder Weapon, the Vlad, an explosive tip crossbow and four new melee weapons. The map features Kevin Smith as a special guest star.

Gems are small collectables, similar to Tokens from the previous map, that allow the player to obtain several different traps from the totem poles found around the map. To activate each totem pole, a total of three gems must be used.

Compared to Zombies in Spaceland, this map is slightly larger. Unlike the previous map, this map has no starting weapon.

The player will spawn on the first floor of the Bear Lodge, where four melee weapons can be picked up, as well as an M1 next to the Spiked Bat. Across from the cabinet containing the four Vlad crossbows is a door that heads into the basement, but it cannot be accessed until the power has been turned on. Up 'N Atoms can be found on the front porch next to the Machete. The fireplace across from the stairs can be used to enter Rave Mode. The Ring memento can be placed on the edge of a table near the fireplace.

When the power is turned on, three doors open in the Bear Lodge. The first door is the trapdoor leading into the spawn room. The second is a door to the right of the Golf Club, where Mule Munchies can be found. The third and final door can be found next to the M1 and Spiked Bat, which opens the second floor of the Bear Lodge. Here, the player can use three ziplines to get across the map if each area containing an end points of each zipline is opened up. A Magic Wheel location can be found on the balcony with the zipline that heads to the Trading Post/White Tail Beach area. The player can also find the Ghost 'N Skulls 2 arcade machine by a pool table. The pool table is where the player can place the 8-Ball memento. A Volk and Tuff 'Nuff can be found in the bunk room, as well as one of the parts of the boat engine.

The buyable barrier next to the fireplace at the Bear Lodge will bring the player down a path that leads to the Mess Hall. On the path, the player can find the Waterfall trap, which can be activated for 750 points, and the Rewind challenge station, as well as Blue Bolts to the left of the door that heads into the Mess Hall's kitchen. Inside the Mess Hall is another piece of the boat engine, which can be found leaning on one of the posts in the center of the room. An empty picture frame can be found, where the Rhino Tiki Mask can be placed. The Pacifier can be placed on the bar inside of the room.

Outside the Mess Hall is a Magic Wheel, as well as a fire pit, a souvenir totem pole and a wooden walkway that heads over to the Camper Cabins. On the walkway is another Volk wallbuy, and a potential spot for an animal statue. To the right of the main exit of the Mess Hall is a wooden bridge that can be opened for 1250 points, which heads down to the White Tail Beach. A small swamp can be found to the right of the wooden bridge, where a storm drain can be opened, which heads over to the Trading Post. The Golden Frog memento can be placed to the left of the sewer pipe, as well as the Shovel memento, where it can be placed in a grave found in the swamp.

Following the wooden walkway from the Mess Hall brings the player over to the Camper Cabins. Here, the player can find an RPR Evo wallbuy, as well as another barrier that heads up to the second level of the area. An animal statue can be found on a picnic table to the right of the RPR Evo. The Black Hole challenge station can be found on the path if coming from the Mess Hall.

The Old Marvin Mine consists of two levels. The top level is where the two doors into the mine connect, as well as three different pathways down to the lower level can be found. One of these pathways is a wooden staircase, where an animal statue can be found.

On the lower level is where the player can find another souvenir totem pole, Bang Bangs and an HVR wallbuy on the minecart. A tunnel in the mine heads into the basement of the Bear Lodge, where the power switch is located. Turning it on will open the trapdoor leading back into the Bear Lodge. A throwing knife game can be played, and the Smiley chainsaw can be obtained next to the game if the player has completed the map's main easter egg in that same game. A Magic Wheel spot can be found in here as well.

At the Archery Range, the player can find another RPR Evo wallbuy, as well as the Wood Chipper trap, which can be activated for 750 points. The Arrowhead memento can be placed on the bar of the booth at the range.

The Recreation Area is a circular area consisting of a central DJ booth, a couple other smaller booths and a trailer. In the trailer, the player can find a Type-2, as well as another animal statue spot next to it. In order to get into the lower level of the Recreation Area, the player must buy one of the two 1250 point doors near the trailer or the 1250 point door at the bottom of the rock wall. Here, the player can find the final boat engine part leaning against the booth, as well as another souvenir totem pole, Quickies, a Karma-45 behind the burning man statue and another Magic Wheel spot. The player can use the DJ booth as a trap, which will attract zombies to the front of the booth, where they will be killed shortly by the music. The second entrance into the Old Marvin Mine can be found across from the sloped road barrier.

The Trading Post can be accessed from the path branching off from the Thunderbird Amphitheater, the path by the wooden bridge by the Mess Hall or the sewer pipe in the swamp by the Mess Hall. Going down the path by the Mess Hall, the player can find a fire pit along the way, as well as the Log Swing trap, which can be activated for 350 points. Here, the player will head to the docks area of the Trading Post, where an animal statue can be found, another Reaver wallbuy, and Trail Blazers inside the building. The docks area contains the boat that heads to Turtle Island. The Fish memento can be placed at the end of the long dock.

The Trading Post over by the Thunderbird Amphitheater contains the Armageddon challenge station. Inside the Trading Post, a cash register, which acts as the map's bank can be found. Continuing through the building will take the player over to the boardwalk by the White Tail beach, where the player can find a small gazebo containing a Fate and Fortune machine and a KBS Longbow to the right of the door. The Binoculars memento can be placed on the bench directly in front of the doorway. Heading left on the boardwalk heads over to a 1250 point barrier, which heads over to the sewer pipe. On this path, an HVR can be found.

These songs can only be heard at the dance party in the Recreation Area, and on Turtle Island during the boss fight.

Rave in the Redwoods layout.

Rave in the Redwoods poster. 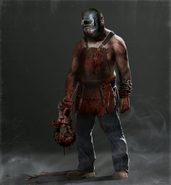 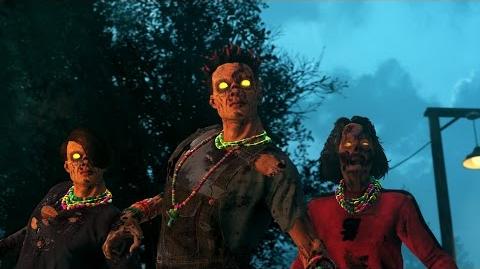 Call of Duty® Infinite Warfare – Rave in the Redwoods Trailer 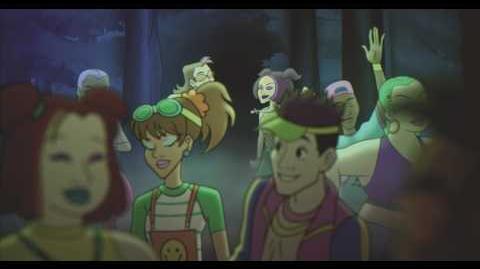 Retrieved from "https://callofduty.fandom.com/wiki/Rave_in_the_Redwoods?oldid=2457209"
Community content is available under CC-BY-SA unless otherwise noted.