For a vehicle with a similar name, see Razorback VTOL.

The Razorback is heavily used by the NRC and the 54 Immortals. It is also used by some of the American soldiers during the World War II simulation during the mission "Demon Within".

It is fully automatic with low recoil, an average fire rate, and average damage. The magazine count is average for the SMG category at 30 rounds. It is outgunned by the majority of the SMGs up close but the accuracy gives it an edge at medium range gunfights.

The Razorback does have one more key advantage over the other SMGs, however. The Razorback has the best range of any SMG by far, with its four-shot range extending out it an impressive 32 meters, and its five-shot kill out to an impressive 76 meters. This makes the range on the weapon comparable to an assault rifle and makes the gun very effective at medium and long-range compared to its SMG brethren.

Rapid Fire can make it a more viable weapon up close and does not affect the recoil too much. The Foregrip is unnecessary due to the Razorback's high accuracy. The iron sights are alright up to medium range but if the player plans to challenge players at a long-range (which is not recommended due to the normal SMG damage) an optic is best.

A silencer will reduce the range of the Razorback which will reduce its usefulness at medium range. However, due to the excellent range of the weapon, the silencer may not be a bad choice If a player wishes to have a stealthy weapon.

Long Barrel is usually a very good attachment for a lot of SMGs, but it is not very helpful for the Razorback since it has a very long four-shot-kill range, and there is almost no line of sight where the player will need more than five shots to kill.

The Quickdraw Grip is not particularly helpful due to the Razorback's good mobility. Overall, the Razorback is a good beginner weapon for those who have trouble with recoil on other weapons. For those who have a bit more experience with controlling recoil, they may want something like the VMP or the Vesper.

The Razorback can be obtained from the Mystery Box in Zetsubou No Shima, where it comes with a BOA 3 sight and Grip by default. It has very low recoil, a fast reload speed, an average, 30-round magazine, and an average 210 rounds of reserve ammunition, but has a low fire rate.

It is a decent weapon for players who are just beginning the game and have not yet unlocked many attachments for weapons since the Razorback comes with a BOA 3 and Grip by default. However, for players who have unlocked plenty of attachments for weapons that can be customized using Weapon Kits, it may be less valuable. Compared to some other non-weapon Kits weapons though, the Razorback could be viewed as more valuable because it has attachments.

Its low rate of fire and damage can be a problem in situations where the player gets cornered, so Double Tap Root Beer 2.0 can be a valuable Perk-a-Cola for the player to purchase when using the Razorback. Its fast reload speed means Speed Cola is not really a necessity, but purchasing it means the weapon will reload extremely fast.

Strangely enough, even though the gun is not available in Weapon Kits or the other maps, it can still be leveled up, much like the MR6.

When it is upgraded, it becomes the Gullinbursti, which holds 60 rounds per magazine plus 420 spare ammunition. It also yields a faster fire rate.

The Razorback in first person 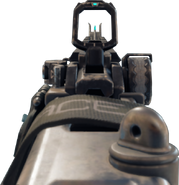 The Kill Counter on the Razorback

The Razorback returns in Call of Duty: Mobile. It was added as part of the Season 2 update.

Initially, the Razorback was available as a reskin for the PDW-57, but from Season 9, it received different stats that completely distinguished it from the PDW-57. It now has lower rate of fire but higher damage and better recoil, making the gun effective even at mid and long range.

The Razorback was available in Battle Royale, however since its separation from the PDW-57 in Season 9, it was removed from Battle Royale and was only available as a customized blueprint. From Season 13, it was added back into Battle Royale as Uncommon, Rare and Epic blueprints. It deals average damage but feature the highest accuracy of all submachine guns in the game.