"Electromagnetic shell that protects against all forms of damage."
— In-game description.

Reactive Armor is a payload for Merc in Call of Duty: Infinite Warfare that is unlocked at level 21. When used, a protective shield forms around the player that decreases damage given to the player from all sources except for environmental damage, such as falling off the playable area of a map or the black hole of a Black Hole Projector. It also increases the player's health by 14 points while under the effects.

A player is coated in a hexagonal patterned camouflage when under the effects of Reactive Armor.

Reactive Armor is best utilized in a situation where the player needs to traverse a sniper sight line or while holding down the objective. It is ill-advised to use Reactive Armor when a player is breaching a defended position that contains multiple enemies, as Reactive Armor does not render the player invincible.

The Reactive Armor duration was once nine seconds, but was decreased to seven seconds in the February 3rd, 2017 update[1]. Within the same update, the amount of health with a Reactive Armor user has been decreased from 133 to 114. 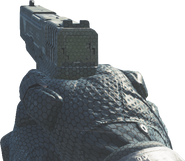 The hexagonal camouflage pattern whilst under the effects of Reactive Armor. 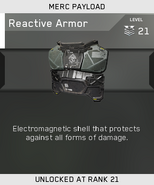 Reactive Armor being unlocked in multiplayer.