"The Reactorniy Avtomat-Izluchatel Kuhlklay-84 (RAI K-84) was developed by Dr. Dimitri Kuhlklay and first manufactured in 1984. The experimental prototype fires fully automatic energy-bolts, but also comes equipped with a ballistic Vortex grenade launcher. When detonated, the grenade creates a temporal distortion field, slowing time for anyone caught inside. Acquired by Requiem agents for analysis."
— Intel

The RAI K-84 is Omega Group's first experimental weapon created using Aetherium technology. It was developed at Outpost 25 by Doctor Dimitri Kuhlklay, a member of the group's Weapons Development department, on April 8th, 1984 in an attempt to impress his superior Doctor William Peck. Peck, however, was unimpressed by Kuhlklay's work, much to the latter's disdain, who decided to hide the components needed to create the weapon around the base.

During the outbreak at Outpost 25, Requiem agents would discover the RAI K-84's blueprints and weapon trial folder from the ruined base, using them to reassemble the weapon both to use in combat and to allow Requiem to begin their own development of experimental Aetherium weaponry through Kuhlklay's research. Peck would later take credit for constructing the RAI K-84 when commenting on the design of Requiem's CRBR-S during the Berlin incident, chuckling that he stole the design much like Requiem did for their weapon.

The RAI K-84 fires purple Aetherium energy-bolt rounds with high power, in addition to being equipped with an underbarrel grenade launcher called the "GP-6K2" that fires small purple orbs reminiscent to the effects of the Ring of Fire ability at the cost of 10 rounds from the magazine. When an orb is shot by the RAI K-84 enough times while a zombie is within it, it will explode, dealing high amounts of damage to any nearby enemies within its proximity.

The RAI K-84 can be obtained from the Mystery Box, as a potential legendary reward from Trials, or by assembling one as part of a small quest. For the quest, there are various items the player must assemble.

Once the player gains access to the Weapon Lab, the player can acquire the RAI K-84's blueprint from a wall above a workbench. Ravenov will tell the player about Doctor Kuhlklay, the weapon's creator, and instructs them to acquire a key from him.

At the Scorched Defense lies the zombified body of Doctor Kuhlklay, laying against a burning vehicle. Upon approaching him, the player will be given a prompt to rip out one of Kuhlklay's eyes, which will start a small in-game cutscene that enables the player to be temporarily ignored by the zombies. While the player performs this action and rips out his left eye, the zombified Kuhlklay will awaken and snarl, causing the player to simply stab the undead doctor in the head with a knife. Afterwards, the player can bring the eye to Kuhlklay's computer in the Weapon Lab, where it can be placed in a retina scanner. Once the eye is scanned, a drawer will open, revealing a locker key that the player can pick up.

With the locker key, the player can now open several lockers found within the two Barracks just beyond the Helipad. After opening some of the lockers, a Mimic will spawn nearby and attack the player. Upon killing the Mimic, it will drop the Barrel Assembly of the RAI K-84, which can then be picked up. Alternatively, if the Mimic does not drop the barrel, the player can continue opening more lockers until another Mimic spawns with the part.

Next to the retina scanner is a computer, which is displaying a circular chart with part of the upper section highlighted. Interacting with the computer will cause a new section to move around the computer, stopping at three certain points that correlate to certain scores on the dart board found next to the Der Wunderfizz machine in the village. The player must memorize the positions that the section on the computer stops, then head to the aforementioned dart board and shoot the positions on the dart board where the section stopped at. After shooting all three, the player can shoot the center of the dart board, causing a secret compartment to open, which will spit out the RAI K-84's Aetherium Converter for the player to collect.

With all of the parts gathered, the player can assemble the RAI K-84 at a workbench to the left of Kuhlklay's computer. 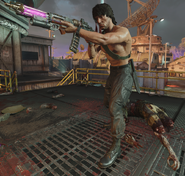 Promo art for Season One Reloaded, where a RAI K-84 can be seen.

The RAI K-84 being offered by the Mystery Box.