Reaper is a Payload for Synaptic in Call of Duty: Infinite Warfare.

Reaper is unlocked at level 28, and allows the Synaptic rig to take on an predatory quadrupedal form. While in this mode, pressing any fire buttons will execute a melee attack with considerable lunge.

This attack is a guaranteed one-hit-kill, even when the victim has spawn armor. While using this payload, enemies are highlighted with red diamonds, although toggling thermal vision can help identify heat signatures. The player will not be able to regenerate health while using this payload, but it can be regained by killing enemies, with each kill adding health back. 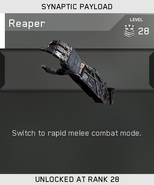 The Reaper being unlocked in multiplayer.