The Reaper is a 9-point (8 with Hardline) Assault Strike Chain reward that appears in Call of Duty: Modern Warfare 3.

The Reaper UAV allows the user to spot targets from the air, and launch missiles at them. The player can launch fourteen missiles of similar power to the Predator Missile, but unlike the Predator Missile the Reaper's missiles will be laser-guided from the Reaper's camera, as opposed to an on-board missile camera, allowing it to easily hit moving targets or targets behind cover. After firing a counter appears which shows the height of the missile making it easier to see when the rocket will hit the ground. The player can zoom in and get a better view on the map by pressing the ADS button. The Reaper is not present on the Wii version of the game.

The Reaper is like a super-powered Predator missile launching system, allowing players to bombard the map longer than a standard air-to-ground missile. It orbits the map quite high in the air, making it able to shoot down enemy aircraft quite easily. It should also be noted that if the Reaper runs out of time, and the player has fired a missile before then, they will be able to control the missile until it hits.

The Reaper's munitions are laser guided unlike the Predator missile which has an onboard camera, so the latter is significantly more accurate in precise shots. The aircraft leaves after every missile is fired or after 40 seconds of flight time, whichever happens faster. An EMP will destroy the killstreak instantly, and the death of the operator also brings it offline. High-flying killstreaks, like the AC-130, can possibly down the aircraft with a precise shot. Any place targeted by the Reaper drone will be lazed red, thus giving those on the ground warning about where the missile will strike. The Reaper only has one set of flares, so two shots are all that is needed to destroy it. 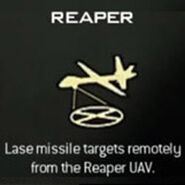 An unused killstreak icon for the Reaper.

Missile fired from the Reaper.