The Reaver is a Kendall Ballistics shotgun featured in Call of Duty: Infinite Warfare.

When all side missions are completed, the Reaver unlocks the Slug Shot upgrade, which allows the weapon to fire a single slug shot round, vastly increasing damage against enemies.

The Reaver is unlocked by default. It is the first shotgun unlocked.

In terms of damage, the Reaver falls short of other shotguns such as the DCM-8. Within point blank, one shot kills are best left not to dependence. However the range of damage is fairly stable, as the player can rely on two hit kills near halfway of the maximum range. As a result, the player is advised to double tap to seal the kill. To counteract the low damage up close, the Reaver possesses an extremely fast fire rate, firing as fast as the player can pull the trigger. This is urged to be controlled however, as the magazine size is small for a semi-automatic shotgun, holding only 10 rounds.

In terms of attachments, the player unlocks the Extended Mag attachment at weapon level 2, boosting the magazine size to 15. Using this attachment allows the player to utilise room clearing manoeuvres more effectively. The Rifled Barrel is also a viable attachment unlocked at weapon level 9, allowing players to extend the reliable two-shot kill range even further than present. The Stock, Optics and Quickdraw for this weapon are ill advised as the Reaver works best without the added time to aim. The Foregrip is also not an essential attachment as enemies will be quickly dispatched without feeling recoil if the player has a quick trigger finger.

In terms of perks, Ghost and Blind Eye as Tier 1 perks allow the player to utilize the Reaver effectively as a stealth role without being detected by UAVs and other scorestreaks. Momentum or Scavenger as a Tier 2 perk will assist with gathering speed or maintaining ammunition reserves, as the Reaver can be quite a greedy weapon with its ammunition. Gung-Ho has a Tier 3 perk allows for shots while sprinting in case the player is surprised by an enemy player or has little time to halt mobility.

The Reaver is available from the Magic Wheel in Zombies in Spaceland, Attack of the Radioactive Thing and The Beast From Beyond for 950 points, and is a wall weapon in Rave in the Redwoods and Shaolin Shuffle for $1000. It is available for customization at level 23. In Rave in the Redwoods, it is found near the boat to turtle island, in a cave in the rave area, and on the path that connects the mess hall to White Tail Beach. In Shaolin Shuffle, it is found in the Heebie Jeebies club, next to the Mosh Pit Trap.

The Reaver boasts moderate damage (less than other shotguns), with a decent magazine size and good hipfire accuracy. Although the Reaver's damage is not the best on offer, it has one of the highest fire caps of any weapon in zombies , allowing rapid killing of any zombies in the way. Bang Bangs and Quickies can turn this shotgun into a potent close quarters weapon that can take out large amounts of zombies easily.

The Reaver's Epic variant, the Machete, adds a blade to the front end of the weapon, allowing massive amounts of melee damage. Using the Machete, melee is a one hit kill up until scene 12. Using the perk Slappy Taffy, melee kills are a one hit kill until scene 23, generating a massive amount of money for the player in posession of this weapon variant.

The Reaver in first person 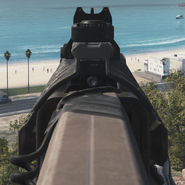 Aiming with the RODEO variant; note how the alignment of the sights is slightly different 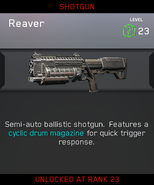 The Reaver being unlocked in Zombies