Reckoning is the fourth and final downloadable content (DLC) pack for Call of Duty: Advanced Warfare. It was released on August 4, 2015 for Xbox Live users and was on September 3, 2015 for PlayStation and PC users.

Reckoning comes with four multiplayer maps, and one Exo Zombies co-op map. Like the previous DLC Supremacy, Reckoning does not feature a bonus DLC multiplayer weapon.

Fracture: An ice digging facility located near one of the poles. Here you must fight it out on a sinking ice cap covered with buildings and windmills, watch out though, as half way through a match some of the ice will sink!

Overload: Located in the middle-east, the teams fight it out in a luxury hotel filled with gold and expensive items. Half way through the match multiple plasma-lights start glowing, which can be shot to release a burst of electricity, killing all nearby enemy team.

Quarantine: Located on an island riddled with a disease outbreak, you must fight in close quarter corridors, long lengths outside or in the central hub. The map-based scorestreak brings a nearby ship to bomb the island.

Swarm: A suburb in Korea, filled with cars and litter. Players must fight in the small buildings or on the main streets. Activate the map-based scorestreak to control a cluster of assault-drone type bots, wrecking havoc for the enemies.

Descent: The four characters; Lilith, Kahn, Decker and Lennox successfully evacuated the ship and have now sought refuge on an island. New zombie additions include purple and orange teleporting zombies, a new weapon; the Trident. A new scorestreak includes an XS1-Goliath fitted with seeking missiles and shoulder missiles. 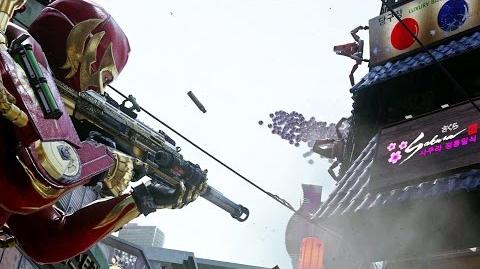