For other uses, see Recon.

Painting 120 Enemies on the Mini-Map

Recon is a Tier 1 perk which appears in Call of Duty: Modern Warfare 3. It is featured in the "First Recon" preset class and is available as soon as Create-A-Class is unlocked.

The perk causes explosive damage (Flash, Stun, and EMP Grenade included) to paint the target on the Minimap. It shows the target as a red arrow on the minimap, showing the direction the enemy is facing in real-time, similar to the Blackbird killstreak from Black Ops. The effect is visible to the user's entire team and lasts for twelve seconds, or six if the enemy is using the Dead Silence perk. Arguably, the best weapon to earn Recon Pro is the XM25 as its relatively low damage, high ammo capacity and relatively high rate of fire allows you to possibly tag a player 2-4 times (as it takes at least 2 grenades to kill a target and the magazine has 4 grenades).

The Pro version is unlocked by painting 120 enemies on the minimap through explosive damage and causes bullet damage to paint the target as well. Painting targets in Free For All also paints the target on everyone's minimap. This perk is less useful in Hardcore modes due to lack of minimap, but can still be used if the player's team has UAV, or if looking through the pause menu.

Recon favors a more supportive style of gameplay, and synergizes well with other supportive perks. Hardline is a strong Tier 2 perk with Recon, mainly for the Pro ability that grants one kill for every two assists. If for whatever reason a painted enemy should evade you, he becomes a prime target for your teammates who will be all the more able to grant you an assist, which will now aid in racking in killstreaks. Recon also compliments Quickdraw for "breach and clear" maneuvers, as hastening your ability to throw an explosive into a room more quickly allows you to follow through with deadly force against opposition whose number, location, and direction you've uncovered.

In terms of Tier 3 perks, SitRep is a strong compliment to Recon, as the position of enemy equipment often can cue players to the position of the enemy himself. Since it's common for players to lay traps in entryways to buildings they've fortified, sending explosive ordinance into such a guarded room can often yield an easy kill. True to Recon's supportive nature, maneuvers such as this also deny the opposition kills by simultaneously removing an enemy from a high-value location and saving your teammates from the enemy's overwatch.

Assassin does not prevent the user from showing themselves in the opponent's radar when hit by a Recon user, therefore making Recon the best counter to Assassin perk users.

Level 4
Recon returns in Call of Duty: Ghosts as an Awareness perk in multiplayer and a passively given perk in Safeguard. It is slightly altered from its Modern Warfare 3 counterpart, however. Enemies hit with explosive damage are no longer painted on the minimap; instead tagged players can be seen through objects, indicated by a bright yellow-orange outline that can be seen through walls and other objects, for a short time. Similar to the Oracle and Motion Sensor. It is unlocked at level 4.

Recon makes a return in Call of Duty Online as a Tier 2 perk. Allowing the player to damage enemies to paint them onto the mini-map. Within Survival, Cyborg Rising and Cyborg Evacuation it highlights Juggernauts and the Cyborg Boss.

"Minimap shows a larger area. Gain a single radar sweep when a standard enemy UAV appears and another when it dies."
— Create-a-Class description

Recon returns in Call of Duty: Infinite Warfare as a Tier One perk. It provides the minimap showing a larger area and you gain a single radar sweep when the standard enemy UAV appears and another when it leaves. It is unlocked by default.

"After an enemy is killed, nearby enemies will be scanned and displayed on the mini map."
— Description

Recon returns in Call of Duty: Mobile as a Tier 2 perk. It was added in March 2021 during the Season 2: Day of Reckoning update.

Unlike previous games, after an enemy is killed, nearby enemies will be scanned and displayed on the mini map. 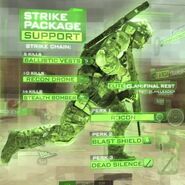 Description of the Pro version. 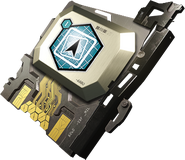