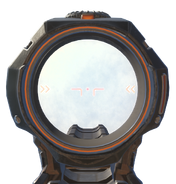 Aiming with the Recon Sight; note the smaller reticle that is enlarged in the final build of the game

The attachment returns in Black Ops 4, simply referred to as Recon. Unlike its Black Ops 3 counterpart, the Recon in Black Ops 4 now as a variable zoom option, switching between 2.0x and 4.0x, functioning similarly to the Hybrid Sight from previous games.

Recon in third person in game.

Recon in game mounted on the Auger DMR.