Call of Duty Wiki
Register
Don't have an account?
Sign In
Advertisement
in: Call of Duty 2 Single Player Levels

1. Walk over to the table by Commissar Letlev

2. Go to the storeroom and obtain a pistol and a rifle

5. Shoot the bottles and the plates

6. Shoot the bottles and the plates while aiming down the sight

7. Shoot as many helmets as you can in 15 seconds

8. Melee attack the mannequin with your weapon

9. Throw potatoes at the marked targets

11. Make your way to the armory

12. Pick up a sub-machine gun, and both frag and smoke grenades

14. Throw a smoke grenade to cross the street safely

15. Wait for the smoke to fill the intersection

16. Plant your explosives on the panzerwerfer

18. Kill the snipers and assemble with the Commissar Letlev.

"Red Army Training" is the first level in Call of Duty 2 in which the player takes control of Vasili Ivanovich Koslov and goes through the training to be in the Red Army. 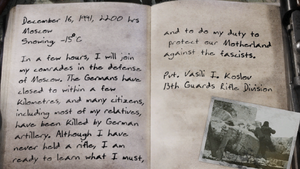 The player will spawn in a captured Opel Blitztruck. Player must complete a basic training, which includes the player shooting the two teddy bears, several bottles and plates, and shooting as much as possible helmets. After the player has completed the training, he/she must follow Letlev to the German P.O.W.. Player will learn that the Germans are planning an attack.

After the successful interrogation, player will need to fight through several houses to find and destroy the Panzerwerfer.

The first troops the player will encounter in the game.

) - Obtained by completing "Red Army Training" on any difficulty.