Unlock Golden Camouflage for every weapon in a single category.

Once unlocked for the appropriate weapon class, Regal camouflage is also available for use on the XM-LAR, Kamchatka-12, .44 Magnum, D-25S, PKM and Mac-10 even if the player has not unlocked Gold camouflage for those weapons.

This camouflage appears as an ornate red and gold finish. It also features a lustrous quality, shining in the light. It appears to be very similar to the Royalty Camouflage from Call of Duty: Advanced Warfare. 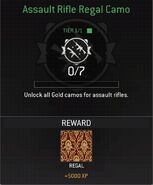 Regal camouflage with an example of the challenge required to unlock it.

M9 with Regal camouflage.
Add a photo to this gallery

Retrieved from "https://callofduty.fandom.com/wiki/Regal_Camouflage?oldid=2499052"
Community content is available under CC-BY-SA unless otherwise noted.