Call of Duty Wiki
Register
Don't have an account?
Sign In
Advertisement
in: Call of Duty: WWII Handguns

The Reichsrevolver is a single-action revolver that was added to Call of Duty: WWII in the second update of The Resistance event on February 13th, 2018, alongside the Enfield No. 2.

Currently, the player can only obtain variants of the weapon from its collection (during The Resistance event) or from Supply Drops. Damage is somewhat similar than the P-08, granting a three shot kill at close to medium ranges but can achieve at two-shot kill at close quarters without the use of High Caliber due to its higher base damage, rewarding accurate players. Compared to other pistols, the Reichsrevolver has the smallest chamber size, tied with the Enfield No. 2 at 6 rounds, with no way to increase this except through the use of Duelist. As such, players have less leeway to miss compared to the P-08 and 9mm SAP as the player may very well use all 6 rounds on a single enemy. Reloads are an issue, as the player has to individually load every bullet as compared to magazines or a speed loader as seen on the Enfield No. 2, and as such Hustle might be a worthwhile basic training.

The Reichsrevolver can be equipped as the player's starting weapon, having a total of 6 rounds in its chamber and 30 in its reserve. It can also be obtained from the Mystery Box on The Final Reich, Gröesten Haus, The Darkest Shore, The Shadowed Throne, Bodega Cervantes, U.S.S. Mount Olympus and Altar of Blood for 1000 Jolts. It can also be purchased from a weapon locker for 500 in The Shadowed Throne. In The Tortured Path, the Reichsrevolver can be found in the starting weapon Waffenbox.

Damage is somewhat low, being comparable to the P-08 and 9mm SAP, requiring a few hits to kill a zombie even in the early waves, but being good for earning Jolts to access other parts of the map or other weapons. Reloads and ammunition are contradictory; the Reichsrevolver has a high ammo reserve, but has a measly 6 rounds in its chamber. As such, reloads are often and will put the player at risk of being caught reloading.

When upgraded via the Ubersprengen or by Mk. II Freefire special mod, it becomes the Glücklicher Punk, gaining a total of 16 rounds in its chamber and a total of 384 in its reserve. It also has higher damage and a faster time for rechambering shots. Damage is somewhat high, only requiring up to 3-4 shots at waves 16 and up, but quickly becomes useless in the 20s. The chamber size has been increased to 16 rounds, but this also compounds the reload problem, requiring multiple seconds to reload, being outclassed by other pistols with higher damage outputs which reload quickly. 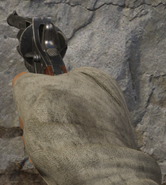 The Reichsrevolver in first person 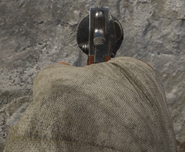 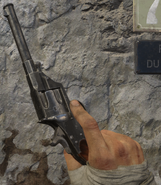 Inspecting a side of the Reichsrevolver

Pre-release model of the Reichsrevolver