"Placed equipment will alert the player of nearby enemies on the minimap. Thrown equipment will paint enemy targets upon detonation."
— In-game description.

Relay is a trait for Stryker in Call of Duty: Infinite Warfare that is unlocked at level 31. It adds a radar scan ability to all placed equipment, and will locate any targets damaged by the equipment. It operates in a combined effect similar to the Portable Radar and the perk Recon from Call of Duty: Modern Warfare 3.

One trick players can do is using C4 with this trait; when enemies are in proximity, the C4 will ping on the radar, giving players the cue to detonate the explosives and earning a potentially free kill. Placing such equipment at high traffic areas, choke points, or wall running areas will increase the odds of success.

Ghost counters this trait by preventing users from being pinged by equipments' proximity and being painted by explosive damage. 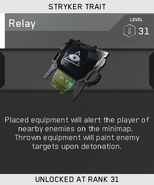 Relay being unlocked in multiplayer.
Community content is available under CC-BY-SA unless otherwise noted.
Advertisement