For another variant, see Remington 870.

The only thing that proves its existence is a texture found in the game files.

The Remington 870 MCS is available for use upon completing "Fallen Angel", though it can only be obtained when customizing the loadout. DeFalco also uses this weapon in the intro cutscene of this mission. In the campaign it is simply referred to as R870 MCS.

The Remington 870 MCS is the first shotgun to be unlocked at Level 4. It possesses the highest range and damage of any pellet shooting shotgun, getting one-shot kills in close-medium range with ADS. It also has a rather quick pump-action (slightly faster than the KSG), but it still has a slower rate of fire than most shotguns in the game.

The Long Barrel is a great attachment, increasing its already good range to exceptional ranges for a shotgun. Fast Mags is also a good attachment to mitigate its rather slow reload time, but if the player reloads in between kills, it is not necessary.

None of the optical attachments show any tangible advantage over the iron sights, other than an increase in zoom, but as shotguns are only truly potent at close to medium range, any additional zoom is unnecessary and sometimes a hindrance at such ranges. The Laser Sight is useful at close range as it will give a greater chance at killing from the hip. The Laser Sight is a good asset to increase the consistency of this shotgun up close, but given that aiming down the sights greatly reduces the spread coverage area, more so than the laser, it may be best opting for Quickdraw Handle instead. The Suppressor is quite effective, as it still has a decent one-hit-kill range.

Compared to the KSG, another pump-action shotgun, the 870 MCS has larger hip fire spread due to its buckshot shells. It's not a bad thing that has a bit larger spread, decent spread allows the 870 MCS has a higher chance at killing from the hip as a shotgun. Players who prefer precision may choose the KSG, that shotgun doesn't spread because it uses slug shells, acts like a manual rifle. On the other hand, the 870 MCS is for normal people or classic shotgun lovers.

Overall, the 870 MCS is a powerful 'classic' pump-action shotgun, it performs well at every situation and is easy to use for everyone.

In TranZit, the Remington 870 MCS is available off the wall at the barn for 1500 points. It is also available off the wall outside of the building in the survival map Bus Depot, next to one of the elevators in the lowest floor in Die Rise, as well as being available in the living room of the yellow house in Nuketown Zombies. The Remington 870 MCS also appears in Mob of the Dead, now costing 1200 points instead of the usual 1500. There are two locations: In the shower by the Afterlife opposite of the laundry machine, and one by the entrance to the citadel tunnel from the cell block. In Cell Block, it is available through the Mystery Box. It also appears in Buried and Origins. In Buried, the Remington 870 MCS chalk can be found in the room above the Barn near Quick Revive. In Origins it can be found off the wall in three locations, in the trenches near the spawn room, near the church close to generator 6, in the Lightning tunnel near generator 5, or it can be dug up with a shovel. When purchased it costs 900 points.

Its performance is similar to the M1897 Trench Gun and Stakeout, though it appears to not be able to hit as many zombies per shell as these other pump action shotguns, due to it only firing four pellets per shell. It has a six shell capacity, as opposed to its campaign/multiplayer counterpart's eight shell capacity. This is in keeping with the M1987 Trench Gun's and Stakeout's capacity. Double Tap Root Beer is essential, as it effectively doubles the Remington's damage and increases the rate of fire. However, without Double Tap, one will find themselves struggling to kill zombies without aiming down the sights or moving very close to the target, due to the R870's low pellet-per-shell ratio. This key weakness keeps it from being effective against zombies past round ten.

Once Pack-a-Punched, it becomes the Refitted-870 Mechanical Cranium Sequencer and has a very high one-hit-kill potential at close range in addition to a much faster pump-action. The Remington 870 MCS can be Pack-a-Punched multiple times to cycle through attachments. These attachments are long barrel and reflex sight. When killed, zombies explode into a red mist, similar to the effect produced by the Wave Gun, albeit without the preceding levitation into the air.

The Remington 870 MCS in first-person 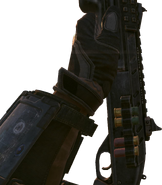 Chambering the next round 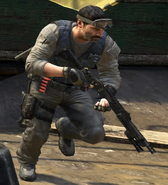 The Remington 870 MCS was cut from Call of Duty: Black Ops III, with evidence of its existence found in the game files. It can also be obtained via console, retaining the same stats as in Black Ops II.

Nevertheless, the MCS is seen in the armory section of the multiplayer map Rift, from the Eclipse DLC.

The Remington 870 MCS in the Armory found on Rift

The weapon appears in Call of Duty: Modern Warfare as the Model 680. It is manufactured by XRK.

The Model 680 in first person.

The default Iron Sights of the Model 680.