For other uses, see Remington.

The Remington New Model Army is available from the mystery box in the Zombies map Buried. It is functionally similar to the Python, but with the ability to reload all six rounds at once, and having higher chest and head multipliers when Pack-a-Punched.

When Pack-a-Punched, it becomes the Sassafras and is effective until rounds in the 40s. The cylinder size is doubled to twelve rounds and reserve ammunition is increased.

The Remington New Model Army is also seen in the hands of Tank Dempsey during the introduction scene on the map Origins, despite not being available to players on that map. 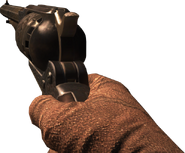 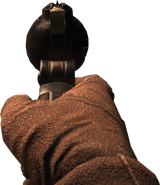 Render of the revolver's model

The Remington New Model Army is used by Dempsey in the introductory cutscene of the remastered map Origins, from the Zombies Chronicles DLC. However, the weapon isn't available in the game at all.

Retrieved from "https://callofduty.fandom.com/wiki/Remington_New_Model_Army?oldid=2560848"
Community content is available under CC-BY-SA unless otherwise noted.