For other uses, see Remington.

The weapon is featured in Call of Duty Online as the R5 RGP.

The Remington R5 (referred to as Remington R5 RGP in the game files) is used later in the campaign by the United States Army, specifically the Ghosts (faction). Logan, Merrick, and Keegan each use a Remington R5 equipped with a Red Dot Sight in the mission "Atlas Falls". During Operation: Return to Sender, Gabriel Rorke, Elias Walker, Merrick, and Alex "Ajax" Johnson use the Remington R5 until the dam breaks. Logan wields an Remington R5 in the opening of "Sin City", but it's never used due to the Federation ambushing the Ghosts.

The Remington R5 costs seven Squad Points to purchase. It has a fully-automatic fire mode by default.

Range is easily the Remington R5's biggest selling point. The Remington R5's range is not only ludicrously long in comparison to other weapons, but the long range is very relevant, seeing how Ghosts has more of an inclination towards long-range combat.

The Remington R5's biggest weakness is its magazine capacity. It has by far the smallest magazine capacity of all assault rifles, SMGs, and LMGs, with a magazine capacity of just 24 rounds. The small magazines also makes the starting ammo loadout small at just 72 rounds total. The very short magazine means that players will have to reload very often despite the very slow rate of fire and high damage, while also substantially reducing the Remington R5's sustained fire capability and ability to take on groups of enemies at once, while also making it more difficult for players to go on extended kill streaks with. The small magazine capacity and ammo loadout is enough of an issue that players often resort to using attachments or perks that can rectify one or both of these issues. Despite having a very slow rate of fire, good damage, good accuracy, and decent reload speeds, users will find themselves needing to reload the Remington R5 frequently thanks to this small magazine.

The barrel attachments are all available. The Silencer is a popular choice since the Remington R5 still has a very good three shot kill range even with a Silencer equipped. The Muzzle Brake further boosts the Remington R5's range and makes five shot kills even less likely. The Flash Suppressor reduces muzzle flash, but the effect is only noticeable if the user is using the iron sights, which many aren't using on the Remington R5.

The mod attachments are all available. Extended Mags is by far the most notable attachment here, as it raises the Remington R5's pitiful magazine capacity to a much more palatable 36 rounds, while boosting the starting ammo loadout to 108 rounds. The magazine capacity and starting ammo loadout are some of the biggest weaknesses of the weapon, and this attachment fixes both problems in one fell swoop. It is a very popular attachment option on the Remington R5 as a result. Semi-automatic is a very intriguing choice on the Remington R5. Since the first shot has 15% less recoil, the Remington R5 essentially has less recoil at all times (although only 5% less recoil per shot since the attachment increases the amount of recoil per shot, and the centerspeed is reduced to 1190). With the attachment, the Remington R5 is capable of getting a two shot kill if at least one shot hits an enemy in a non-limb part of their body. However, the Remington R5 pays for this great range and damage with a pitiful firecap of just 487 RPM, just a hair faster than the MK14 EBR, a weapon with a much longer two shot kill range and far less reliance on hitting the enemy in specific parts of the body to achieve that two hit kill. Burst Fire allows for three round bursts at an overall fire rate of 371 RPM, in addition to several disadvantages. The range is reduced by 25%, the hip-fire spread is 20% larger, recoil per shot is increased by 15%, and the centerspeed is lowered to 1190, in exchange for the potential to get a two shot kill to centre-mass and higher. The performance cost of this attachment is very high, and many players avoid it as such.

The Remington R5 appears in the maps Awakening and Exodus. It costs $2000. It is different from the version in multiplayer and campaign in that it has a 40-round magazine, making it more effective. This makes it very similar to the Maverick which is also on the map and the AK-12 which isn't. The Maverick is usually better thanks to its elevated rate of fire giving it a much higher damage output. Players may want to consider equipping Rapid Fire on the Remington R5 to offset its poor fire rate.

That said, the Remington R5 is a competent weapon on its own. Its range advantage can prove to be very useful since Awakening and Exodus sees players dealing with aerial opponents at longer ranges, where the Remington R5's great range and solid accuracy can be put to great effect. Although it faces steep competition with the Maverick, the Remington R5's statistical advantages over the Maverick make it a relevant and worthy choice on the maps where it can be purchased. 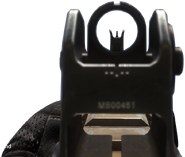 The Remington R5 is used by Wallcroft in Call of Duty: Heroes.