The Remote Sentry is a 12-point Support Strike Chain that appears in Call of Duty: Modern Warfare 3.

It is similar to the Sentry Gun of previous games, but is manually operated with a slower firing rate. This type of Sentry Gun is less noticeable in a few multiplayer maps because of its slightly smaller size. This type of Sentry is also capable of turning a full 360 degrees, and can almost aim straight up. This type of sentry does not have any bullet penetration, especially to soft objects like blankets or thin wood. While using the remote sentry, the camera switches to thermal vision, and players are colored white, with red boxes indicating hostiles (except for those who are using Blind Eye).

Remote Sentries are excellent corridor killers. Enemies being forced down a bottle-neck risk being killed by a lone remote sentry. Player-controlled sentries can also take out those using Blind Eye and are also highly effective against larger enemy air support, such as Attack Helicopters and Pave Lows, or even any enemy air support.

The turret can be moved around, and can be switched on or off to allow the player to attack someone who has managed to get to the user's location, although it takes a couple of seconds. However, just like any other controllable killstreak, the player is vulnerable to other players who have managed to sneak past the Remote Sentry, unless they are unnoticeable and have enough time to get out before getting killed. Throwing Flash or Concussion Grenades can blur the screen of the player, while a well placed EMP Grenade can destroy the Remote Sentry with ease.

The Remote Sentry is useful for defending objectives from a close range or it could be placed further away, along a sightline, such as Bomb Sites in Demolition, or Flags, such as Domination and Capture the Flag. 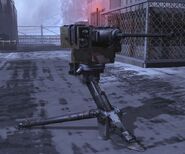 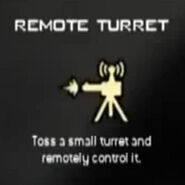 An unused killstreak icon for the Remote Sentry.

A perk icon in the Modern Warfare 3 game files referred to as specialty_remote_mg_turret.
Community content is available under CC-BY-SA unless otherwise noted.
Advertisement