For other variants, see M9 and M93 Raffica.

The Renetti was added to Call of Duty: Modern Warfare as part of the Season Three content for the game. It is manufactured by Silverfield Ordnance.

It has moderate damage output, a large magazine compared to other handguns, and relatively controllable recoil. 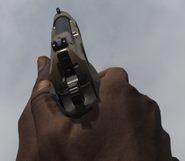 The Renetti in first person

The default iron sights of the Renetti

15 rounds
(21 and 27 rounds with ammunition attachments)

Headshot 30 enemies with a Pistol to unlock

The Renetti returns in Call of Duty: Mobile. It was added in May 2021 as part of the Season 3: Tokyo Escape update. Compared to the Modern warfare version, It fires a 3 round burst instead of semi-auto.

The Renetti has the largest base magazine, 15 rounds, and balances damage as well as accuracy.

It has the ability to one-burst to the torso up to 20 meters. After 30 meters, damage drops to at least two bursts, though one-bursts to the head are possible. Damage can seem inconsistent, especially when fire is spread through the torso and belly, since shots to the stomach are weaker than shots to the torso, where the gun has most effect.

Attachment-wise, the Renetti is the only pistol with a dedicated stock attachment slot, not to be confused with a stock attachment, like with the J358, which provides an option between the folding stock, a foregrip, or a combination of both. The stock enhances general accuracy, while the foregrip enhances recoil control. Equipping the foregrip or combo will prevent the use of laser attachments, however. With certain attachments, the weapon can have no recoil with each burst, meaning one can consistently stay on target.

In general, the Renetti is a stable backup weapon, though requiring skill and accuracy to take full advantage of the exceptional damage and fire-rate.

The Renetti is currently unavailable for looting in Classic Battle Royale, though it can be equipped in the personal loadout. It can however be looted in the Sniper Challenge.