"The CIA's most secretive department pits an international team of covert operatives against a new Cold War adversary, and an otherworldly danger. Their mission: contain the threat, both from Omega and the beyond."
— Background

Requiem is a Central Intelligence Agency backed international faction featured in the Zombies mode of Call of Duty: Black Ops Cold War. It is led by an Unnamed Director[1], while its strike teams are led by Grigori Weaver.[2] They are responsible for containing and investigating the dimensional breaches across the globe. They are also mentioned briefly in an intel for Call of Duty: Warzone.

Requiem has been active since 1983 and has been investigating the various dimensional breaches and anomalies manifesting across the world as a result of the Omega Group reactivating the particle-collider at the abandoned Nazi Projekt Endstation facility. Requiem is responsible for combatting the many Dark Aether manifestations that appear across the globe, they were also sent to investigate the abandoned "Projekt Endstation" facility in Poland after the Omega Group's arrival beforehand. With the help of a former Omega Group member named Orlov, Requiem was able to close the rift at the facility before exfiltrating as the facility was destroyed.

Whilst the "Project Endstation" facility has been dealt with, seemingly dealing a major blow the plans of the Omega Group, more Dark Aether dimensional tears continue to appear worldwide. During this, the Director of Requiem has been putting work into a project known as "Operation Threshold" and Weaver is once more contacted by the enigmatic Samantha Maxis about meeting a contact within Omega Group and their newest facility in Vietnam.

After sometime and no contact from Samantha; Weaver is contacted by Ravenov who alerts Weaver that Samantha has been captured by Omega Group and tells him of the site of the newest testing and operations facility, the site formerly known as Firebase Ripcord during the Vietnam War, now known as Omega Outpost 25. 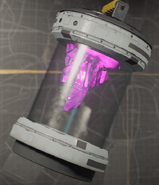 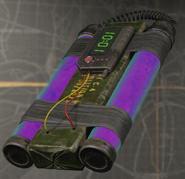 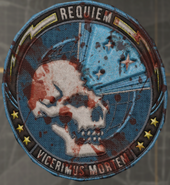 Patch of the Requiem insignia.

A Requiem Strike team watches Samantha Maxis exit the Dark Aether. Note that operators present are not canon, and are subject to player selection. 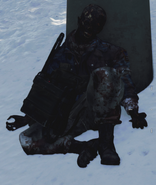 Requiem agent Klaus volunteers to send himself into the Dark Aether.

Raptor One is rescued by Requiem agents. Note that operators present are not canon, and are subject to player selection.

Requiem escapes Berlin, through use of a portal opened by Samantha Maxis.

The Director of Requiem watches Sam through surveillance cameras.

A Requiem memo concerning the recent mission in Berlin.

The Director continues to type his memo.