Urban with some woodland

Retreat is a multiplayer map featured in Call of Duty: Advanced Warfare. It was first seen on a poster on the map Showtime in Call of Duty: Ghosts. The map pits players in a Chinese Atlas resort having beautiful terrain and landmarks. Retreat appears in Exo Survival as a Tier 1 map.

Retreat has been advertised as a stereotypical three-lane lap: one land down the middle, and two separate ways to the respective sides. The middle is usually a position for long range combat between snipers, and the side with the pool is a common place for short-medium range skirmishes. Finally, the other side is a narrow path commonly used as an alternative path to various locations.

There are many interior areas located around the map, most notably the ones near the middle lane. In the middle is a passage that links to the pool, where many short range weapon users will excel. Aerial Killstreaks are okay to use on the map, but some players are incapable of being killed due to being stuck inside a building.

When players from the opposing team are in a good vantage point, they can see enemy players through the windows but the glass is bullet proof so neither player can kill the other. It will however give information to the player how many people are inside so they can either be tactical of how they go in and out or ambush the enemy player as their advantage.

There is a window that has a good vantage point (depending on the situation) to the A Flag. It will leave them small exposure to the enemy player. There is a railing that people can hop on and use it as a point where they can crouch so they won't be exposed by players of the opposing team.

A poster of the map in Showtime on Call of Duty: Ghosts 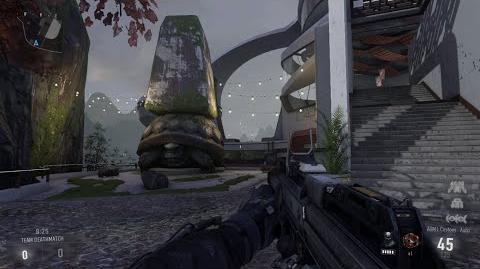