For the challenge, see Humiliation.

"This is for the boys at Hereford."
— Captain Price before executing Waraabe.

"Return To Sender" is the tenth mission of Call of Duty: Modern Warfare 3. The player controls Yuri as he, Soap, and Price search for Waraabe, a man involved in the distribution of the chemical that caused the chemical attacks on Europe. The mission takes place in Somalia.

In the briefing cutscene, Price contacts Baseplate, who is now revealed to be MacMillan, trying to find intel on Makarov. MacMillan sighs, telling Price that they've "put a lot of names on the clock tower this week", and warns him that he's on "everyone's shit-list" and is reluctant to share intel unofficially with him. Price then angrily says to MacMillan that "he still owes him for Pripyat". MacMillan then tells Price that Waraabe, an African warlord in Somalia, should have intel on Makarov. Price discusses their plan to enter the compound with Soap, deciding that a stealthy approach is not an option and asks Soap to tell Nikolai to ready his men.

Yuri is in the backseat of a jeep heading to the enemy compound, with Price and Soap in the driver's and passenger's seats respectively. As soon as they ram through the gates, they come out of their vehicles and cut their way in through the heavy enemy resistance as they are bombarded by mortars and attacked by Technicals. Yuri is given control of Nikolai's chopper's remote turret to soften up the resistance.

After a lot of fighting through the compound, they head into Waraabe's office building and meet fierce resistance inside. After the militia are eliminated, they breach inside an office and kill everyone inside except Waraabe. The three intruders put on gas masks and the interrogation begins. Price releases the gas from the chemical attacks in Europe in the corner of the room and demands an already-frightened Waraabe to tell them Makarov's location in exchange for a gas mask to save his life.

Panicking, Waraabe hastily tells them that his contact was a man named Volk and that he never personally met Makarov. Soap steps on Waraabe's thigh, asking for Volk's location. In pain, Waraabe finally breaks and reveals that Volk can be found in Paris. Price gives Waraabe a gas mask, but seconds later he promptly executes him as he holds the gas mask. Before killing Waraabe, Price exclaimed "This is for the boys at Hereford", referring to the SAS members who were killed in the event of the chemical attacks.

The remaining members of Nikolai's men leave the building and head to their primary exfil point, but Nikolai radios them and alerts them of a rapidly approaching sandstorm. They regroup with the other members and hurry on to the exfil point, but before they can board the chopper, they are ambushed by the militia and are forced to cut their way through to the second LZ. Again, the second exfil is on the roof of a building full of militia, but the 141 and Nikolai's men deal with them. The LZ still being too hot, Yuri uses the remote turret to neutralize any hostile militia. Unfortunately, a rocket shoots down Nikolai's helicopter, sending it hurtling out of control towards Price's group. The trio rappels down the building to avoid getting hit by the out of control helicopter.

Price tells Echo Team to find Nikolai, and to execute an emergency exfil. They make their way through the heavy sandstorm, dealing with Waraabe's men along the way. The group makes it to the crash site, and Yuri carries an injured Nikolai with the others to the emergency exfil, where they finally get out of the village. Soap then asks how they plan to capture Volk while the war rages in Europe. Price replies that while they can't, he knows someone who can. 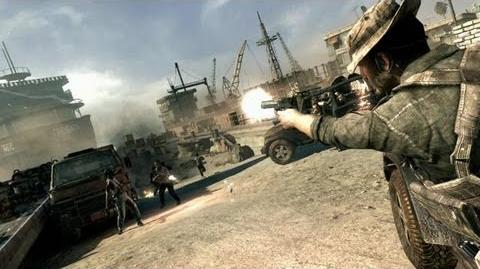 23. Just past the docks area, in the blue and white "L" shaped building up the stairs. The intel is sitting on a desk.

24. The intel is sitting on a table in the west side of Waraabe's office.

25. The third intel is in a small, "guard post"-like building next to a burning car. 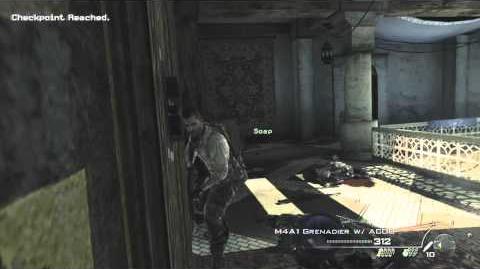 Soap briefing Yuri as they head towards the dockyard in the beginning.

Price executes Waraabe after getting the necessary intel out of him.

Nikolai's chopper spins out of control after being hit by a rocket.

Yuri and Soap jump out of the helicopter's way before it sends them flying off the roof. The sandstorm also starts to hit the town.

The crash site of Nikolai's chopper.

Price shooting the African Militia with a Desert Eagle at the beginning of the mission.

Jeeps at the starting of the level.

The model for the crashed Hind is already on the ground.