(These messages appear in the pause menu, and change whenever the screen says "Objective Updated")

"The Nova 6 strike is imminent. Hundreds of sleeper agents, hidden in every state capitol, are about to unleash this poison on your own countrymen."
— Hudson trying to reason with Mason.

"Revelations" is the fourteenth and penultimate campaign mission in Call of Duty: Black Ops. The mission is mostly cinematic, similar to "U.S.D.D." earlier in the game.

At the beginning of the level, the primary interrogator is heard arguing with his companion. The first interrogator insists that Mason can prevent catastrophe. He chooses to reveal himself to Mason as his final idea - Jason Hudson. He calls to Grigori Weaver to make his escape, who promptly does.

Hudson yells out in frustration at Mason, insisting that Reznov is dead. He then states that Mason not a traitor, and begins untying him. Mason catches Hudson off-guard with a punch, knocking him out. He then finishes untying himself and begins to stagger through the corridors, searching for Viktor Reznov. As he does, he experiences flashbacks of his interrogations and experiences. As he reaches an operating theater, his memory of his time in Vorkuta returns.

In a brief flashback, Friedrich Steiner explains to Nikita Dragovich that Mason is atypical and is far more resistant to the brainwashing. Dragovich ordered for him to be sent back to his cell to rot, if he would not follow his orders.

Mason continues on, having more flashes of brainwashing dialog, particularly of Reznov's words from the gulag. He also has flashes of his meeting with Kennedy, his mission in Executive Order, and his and Reznov's attack on Rebirth Island. As Mason reaches a computer lab, Hudson having caught up, sucker-punches Mason who, having both endured hours of torture, and having the numbers messing with his mind, loses consciousness.

Mason falls within himself and remembers his experiences in Vorkuta, of Reznov talking to him whilst he was strapped to a table. He insisted that he and Mason were the same, and spoke the mantra that Mason would continue to repeat to himself throughout his life.

As Mason comes to, Hudson holds him at gunpoint, revealing that Reznov was not the defector with the dossier with the Nova 6, and had not accompanied Mason to Rebirth Island or Laos. The flashes show that Mason, proclaiming his identity as Viktor Reznov, had executed Steiner.

Hudson reveals that Reznov died after Mason jumped to the train during the escape on Vorkuta. All the years Mason thought Reznov was with him, it was only his mind. (If the player was still looking at Reznov's truck in Vorkuta, it flipped, and Reznov presumably died in the crash.) Dragovich brainwashed Mason to kill Kennedy, but Reznov, thirsty for revenge for the death of Dimitri Petrenko, reprogrammed him to focus on Kravchenko, Steiner and Dragovich himself. Hudson explains that the gaps in Mason's memory will return now that the brainwashing has been broken. Mason laments his actions, but at the urgings of Hudson, focuses on the monitors displaying numbers to locate the broadcasting station.

Mason watches the monitors and sees what he couldn't before, he realizes that the numbers are being broadcast from the Russian ship, the Rusalka. Mason remembers that the Rusalka was stationed in Cuba, evidently the "new relationship" that Castro and Dragovich honored. Hudson and Mason then prepare to strike the ship. 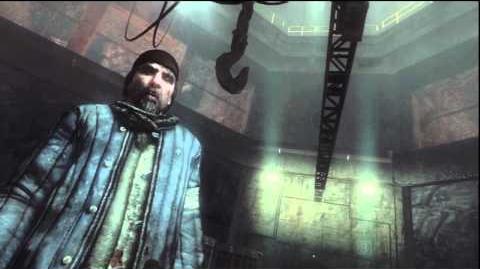 Hudson and Weaver revealing themselves to Mason as his interrogators.

Mason about to punch Hudson.

Concept art of the interrogation room.

The logo of the National Security Agency found outside of the interrogation room.

The rocket from "Executive Order" taking off.

A room filled with images of Viktor Reznov.

Hudson about to punch Mason.

Reznov talking to Mason on the operating table. 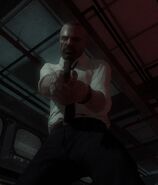 Hudson pointing an M1911 at Mason.

Mason as Reznov in the flashback.

Hudson with his sunglasses on.

Retrieved from "https://callofduty.fandom.com/wiki/Revelations_(mission)?oldid=2493381"
Community content is available under CC-BY-SA unless otherwise noted.