For the equipment in Zombies, see Rewind (Zombies).

"Rewinds your position and replenishes health and ammunition."
— In-game description.

Rewind is a payload for Synaptic in Call of Duty: Infinite Warfare. It is unlocked at level 12. Rewind allows the player to literally rewind themselves along the path they have traversed to the location they were located at three seconds prior. Using Rewind also refills player's ammunition and heals the player to full health.

Rewind is useful for classes utilising shotguns and submachine guns, as Rewind allows the player to quickly escape from a situation they cannot excel in, such as entering a room filled with enemy players. Rewind also sports scouting uses, as a player can enter an objective location to determine who and what is currently occupying the room, then use Rewind to escape from the situation and then approach the same area with knowledge of the enemy force's defensive setup.

The Rewind cooldown was originally 60 seconds, however this was increased to 90 seconds in the February 3rd, 2017 update[1].

Rewind is found at Zombies in Spaceland at the prize charts for 25 tickets and has a cooldown of 5 rounds (all prize charts shares a 5 rounds cooldown). In Rave in the Redwoods it can be obtained by completing the Melee kills quest near the spawn room. It works by rewinding your character some seconds, replenishing some ammo and grenades. You should avoid using it at the middle of a fight, as it can take you to the worse place. It has a cooldown of 2 rounds. 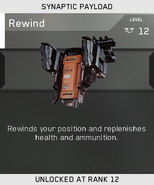 Rewind being unlocked in multiplayer.