"For our fans who purchased the Black Ops Hardened or Prestige Editions and already own the four re-mastered maps, the other contents in the Rezurrection pack will be included at no cost, including Moon, the soundtrack and the theme."
— Activision

Rezurrection is the last Call of Duty: Black Ops downloadable content (DLC). It was first mentioned in an Activision earnings release. It was released on August 23, 2011 first to Xbox 360 and was released on September 22, 2011 to PS3 and PC.

Lift off into the latest Zombies epic with “Rezurrection,” the most recent downloadable content pack for “Call of Duty: Black Ops,” and the first to launch players into space for a new dimension of undead action!

Old school Zombies strategies get blown out the airlock in “Moon,” where the Call of Duty: Zombies saga comes full circle:

The undead have transformed Area 51 into a No Man’s Land, forcing our fearless heroes to escape to an abandoned top-secret moon base where they will face their ultimate challenge and bring an end to the Zombies menace. Whether battling in the lush Biodome or the subterranean shadows of a lunar mine, devious phasing zombies will test your reflexes as they shift in and out of sight. Watch for the undead astronauts as they run riot, unaffected by the base’s fluctuating gravity and lack of life support. Arm yourself with a space-age arsenal of new zombie-killing weapons including the Wave Gun, capable of cooking zombies from the inside-out, and the Quantum Entanglement Device, which taps theories of quantum mechanics to bless (or curse!) your battle against the undead. New equipment types and an all-new perk for thrice the zombie-slaying fun will help unearth the conspiracies that have plagued our heroes since 1943. “Rezurrection” also boasts the original four maps that spawned the Zombie phenomenon. Now armed with the firepower behind Black Ops, players can relive the original nightmare of “Nacht der Untoten,” escape the zombie madness in the asylum of “Verrückt,” battle back the undead Imperial Army of “Shi No Numa,” and pull the plug on “Der Riese,” the zombie factory that started it all.

Another Moon screenshot. Note part of the Waffen SS symbol on the crane

Another screenshot of Moon

Call of Duty Black Ops - Rezurrection Behind the Scenes Preview 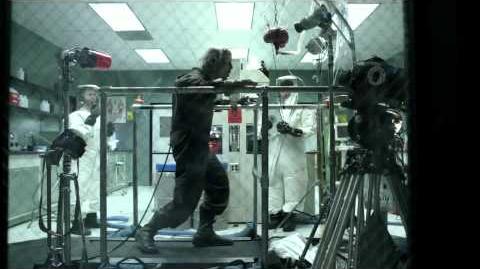