The Ribeyrolles is a submachine gun that was added to Call of Duty: WWII with the Days of Summer event. It features a round half moon magazine which the bullets can be visually seen and are expended while firing.

The Ribeyrolles is available from the Mystery Box in all maps for 1,000 Jolts and from the Submachine Gun Waffenbox in "The Tortured Path" for 2,000 Jolts. When upgraded by either the Ubersprengen or by the Freefire perk mod "MK. 2" it becomes the Roland's Count gaining an increased reserve ammo count of 240, increased damage along with firing explosive shots that deal no self damage. 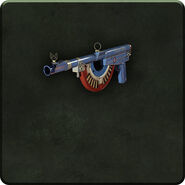 Promo of the Ribeyrolles "Breezy" variant
Add a photo to this gallery
Retrieved from "https://callofduty.fandom.com/wiki/Ribeyrolles?oldid=2480129"
Community content is available under CC-BY-SA unless otherwise noted.