Richtofen's Grand Scheme is the signature quest on the Zombies map, Moon. It must be completed in order to obtain the achievement Cryogenic Slumber Party and the achievement Big Bang Theory.

In Black Ops, full completion cannot be completed in solo. This is not the case in Black Ops III, or in either up to Cryogenic Slumber Party.

Doing the steps require lots of time, patience and teamwork, as well as some points and luck with obtaining the right weapons from the Mystery Box. In Black Ops, making a crawler zombie (by blowing a zombie's legs off with explosives to make the zombie significantly slower) whilst doing the steps at the end of a round helps significantly by giving the player(s) more time and freedom to do the necessary.

Not all of the following steps below have to follow the order in which they are listed and may be done as soon as the opportunity to complete them is available.

Opening the Slot for the Vril Sphere

Step 2: Hacking in the Laboratory

Proceed to the second floor of the Laboratory. On a wall to the left of the stairs leading to the third floor laboratory (near the Bowie Knife), there will be four dim switches lined up next to each other. One of these must be hacked for 500 points. After doing so, the player will have to search all three floors of the laboratory for four white panel boxes with bright green lights. A total of eight panels are spread between the three floors, three on the top floor, two on the second, and three on the third. The player must hack all four lit panels within 60 seconds or the player will have to hack one of the red buttons again to restart the process, ultimately costing the player another 500 points for each failed attempt. Each of these lit panels makes a buzzing sound that increases in volume as a player reaches it. Once the player has successfully hacked four green light panels the player must head back to the four lined up Red Buttons, the player(s) needs to press all four of them rapidly. It is easiest to just go from left to right or vice versa rapidly pressing the 'use/action' button.

When the player is successful, they will all pulsate red, and the various buttons around them will flash as well. Additionally, the center of the Vril Interface on the front of the pyramid will now be indented.

The player must then let excavator Pi breach Tunnel 6. Immediately after, take the hacker back to the spawn area, and hack the excavator terminal. Once the player returns to Tunnel 6, they will find the Vril Sphere (the characters refer to it as the egg but in truth it is a Vril Device) lying on the ground near the M16/Kuda(BO3). The Vril Sphere must be moved into the center of the Vril Interface on the pyramid, or M.P.D . The Sphere must be knifed or shot to get it moving. Once knifed, it will begin to float towards a satellite dish on top of the Receiving Area. If the egg gets stuck, simply knife it again or shoot it, and remember to open doors for it.

After it reaches the dish, it must be shot with the Wave Gun to have it fall down and travel towards Tunnel 11. This is the only part of the Easter Egg where the Wave Gun is needed. Eventually the Sphere will get stuck in a tight corner in the ceiling, just above a barrier adjacent to the Stamin-Up perk machine, inside Tunnel 11. To get it out, either throw a grenade, or shoot any projectiles that induce splash damage, such as Ray Gun shots, although it can be freed with bullets if shot from the right angle. Once taken to the M.P.D., it will merge with the plate in front of the pyramid if the slot is open.

A cylindrical glass container will rise in the front right corner of the Pyramid. The player must kill 25 zombies near this tube and have their souls sucked into the tube; the range the souls can be collected is very short. Zombies that are killed within range will have a red stream of dust emit out and into the ceiling. Zombies killed via Nukes and Astronaut Zombies will count. When the tube is full, players will hear a specific sound. On the right wall, one can find a special switch resembling a Power Switch, and must use the switch with the use button. The pyramid will open revealing Samantha Maxis and rewarding everyone with a 90-second Death Machine, as well as the Cryogenic Slumber Party achievement.

Powering Up the Vril Device

Note: These sets of steps can be done at any point in the Easter Egg before Part 2, even during the steps of Part 1.

1: Obtaining the Parts Necessary for the Computer

Note: Finding “The Curved Wire” can be done during the steps of obtaining “The Plates” or after, as these two steps are interchangeable.

Go back to Area 51, and look to the right side of the teleporter. The player will see a beam structure with some hexagonal-shaped plates stored on it. Throw a grenade to get the plates down, the character will mention the loose plates if done correctly, and then throw a Gersh Device. If done correctly the plates should be on the teleporter with the player, and the player should teleport back.

The player should see the plates near the Quick Revive in the spawn room. The player must throw a QED on them so that they move to the right side of the room, and stand upright in two brackets on a small machine next to a computer. They will be moved there regardless of the effect the QED produces.

Now the player has to look around the labs for a lead wire. It is long, curved, and silver, and is located on any floor of the labs. It may be on the ground, against a wall or crate, or inside any desk where the Hacker may spawn. Also, it can spawn outside on the Moon near the entrance of the teleporter or by the crates to the right of the door leading outside. It can also spawn in the starting room by the excavator switch. Although, these three locations are rare, and it is likely to be found within the labs.

Once a player has grabbed the wire, it will appear in the player's inventory.

On the PS3 version, there is a glitch where if there is no gravity in the receiving area, sometimes the player will not be able to complete this part of the Easter Egg.

After opening the M.P.D. and obtaining the powered up Vril Device, go back to the opened pyramid. Four tubes will appear, and the player must kill now 25 zombies by each, similarly to step 2 of Opening the M.P.D.. As with that step, the player will know they are filling the tubes when red souls fly out of zombies. However, Samantha will also begin to scream and violently shake the screen as the tubes fill. After all the tubes have been filled, put the Vril Device in the slot in front of the pyramid. Samantha and Edward Richtofen should switch souls after the Vril Device is inserted, which will then give the person playing as Richtofen all eight perks permanently. At this point, the Vril Device cannot be removed from the Vril Interface on the M.P.D.

After Richtofen switches souls with Samantha, Maxis will ask the players to free him so he can help with minimising the damage which Richtofen will cause.

Note: For the steps below, the “Simon Says” step can be performed during the steps of “Retrieving the Vril Sphere” or after, as the two can be interchanged.

Play the electronic color-game three times, the one from the first Simon Says. Unlike the first time, the game begins by showing the player the first three colors, then four, and five on the last time around. This makes it much more difficult to complete. If the player does finish it correctly, Maxis will say something about controlling the station, and asks the player to move the Vril sphere. As well, each of the three rockets in the large gap will rise each time the player completes the color game.

Throw a QED directly onto the Vril Interface symbol on the front of the Pyramid in the power room to make the Vril Sphere move again. It should launch over to the Simon Says machine.

Now take a Gersh Device and throw it near the Vril Sphere, if done right, the sphere will be teleported.

After completing all three sets of Simon Says and after retrieving the Sphere, Maxis will say something, and a countdown should start. The three rockets will be launched toward Earth and, 30–40 seconds later, incinerate it. This will change how Earth looks upon travelling back to it. Upon impact, the ground shakes severely, and all players will receive all eight perks for the remainder of the game, as well as the Big Bang Theory secret achievement. The perks will remain even through being downed or death, with the exception of Quick Revive in Black Ops III when in solo.

The four terminals used for Simon Says in Step 1 of “Opening the Slot for the Vril Sphere”.

The four panels used in Step 2 of “Opening the Slot for the Vril Sphere” after their activation.

The location of the two hexagonal panels seen in one of the shelves fetched in Step 1 of “The Plates”, highlighted in green.

The appearance and a possible location for the copper wire fetched in the step for “The Curved Wire”.

The location of the computer used in “Charging the Vril Device”.

Area 51 after the explosion. 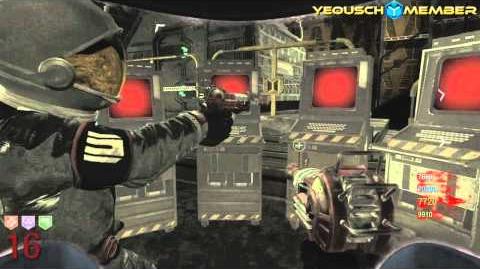