The Rift E9 is a two-round burst fire energy pistol added in Call of Duty: Black Ops III in the June 14, 2016 update. It is obtained through Supply Drops.

The Rift E9 fires an energy projectile instead of hitscans like normal weapons. This can make hitting enemies very difficult. This gun also has unlimited range. The energy bolts cannot detonate a C4. A player who kills an enemy underwater will receive a Depth Charge medal. Much like the Banshii shotgun that was added alongside this weapon, it is also very useful for destroying some enemy scorestreaks. Although it isn't near as versatile as the Banshii in terms of ease with destroying scorestreaks, it can still destroy Wraiths in as little as two bursts and Motherships in three bursts. Even Care Package Deploy Ships can be one-bursted by the Rift E9. However, the Rift E9 struggles to do much damage to UAV's and CUAV's.

The Rift E9 can be obtained from the Mystery Box in the Zombies map Revelations, where it comes with an ELO Sight, Laser Sight and Fast Mags by default. The weapon can be seen in the hands of Edward Richtofen on the map's poster. When Pack-a-Punched, it becomes the Elder Invader, which buffs the damage and gives the gun an outstanding 68-round magazine and more ammo. 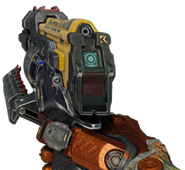