"Citizens of Berlin! A ring of steel surrounds your rotten city! We will crush all who still dare to resist the will of the Red Army! Abandon your posts, abandon your homes, abandon all hope! Ura!"
— Commissar Markhov

"Ring of Steel" is the ninth mission in Call of Duty: World at War. It continues from the level "Blood and Iron" in which a train full of Soviet troops assault the surrounding area of suburbs and outskirts of Berlin. Half of the fighting then takes place in a CQC area but the beginning of the fighting takes place outside.

After getting out of the train, there will be two PPSh-41s laying around. Both sides are equally defended, but stick to the right side since a T-34 will be rolling up there. Use the Mosin-Nagant to deal with the infantry at a long range, or come in close with a PPSh-41 from the two that are leaning on some boxes while gathering ammo from downed comrades. Hiding behind the low walls in a prone position is a good way to preserve or restore health. Continue to head up the stairs of either building, but be careful as there are some Germans up the stairs with MP40s. Once all of the Germans are eliminated in the building, there is no need to enter the adjacent building; allies will finish that one off. Panzerschrecks can be shot at the building where all of the tanks are shooting at to speed up the event cues, but it is not necessary. Once Sgt. Reznov tells the team to advance, enter the building via a hole in the wall on the east of it. Once in the building, there is a choice to make: trade in a weapon for a near empty MG42 or not. If one decides to change, the Mosin-Nagant should not be the abandoned weapon, as the Kar98k and more Mosin-Nagants will be less available in the next battles. Either way, stock up before continuing on and then go. There should be some comrades taking out German POWs, and then a T-34 tank should destroy the wall for the player to get through. There are now two options: continue to attack the Germans at the higher balcony area with Commissar Markhov or battle the Germans defending the entrance of the Asylum with Reznov with and MG supporting the Germans.

Both battles are almost equal in difficulty, but if the player takes the balcony area and then moves on to support Reznov, one will need to make sure to kill the Germans, a majority of them will be hiding behind cover (sometimes they will hide behind a car) toss a grenade at them to destroy the car in which its explosions should kill any surrounding Germans. Try to hide in the partially destroyed houses on the right, as no grenade can reach the player in there. Once the battle is done there, help Reznov and the comrades defeat the German defenders on the ground. Aim for the MG gunner first, as the MG mows down anyone quickly, then mop up the Germans hiding behind cover; the MG will sometimes periodically come back, though, one should be able to destroy all enemies before that happens. Enter the Asylum and continue on.

Now the CQC battle begins. Reznov will then tell the player to grab a shotgun, this is one of the only times the Double-Barreled Shotgun w/grip will be used. When the player comes up the stairs, there will be an MG42 leaning against the drawer behind the player. There is plenty of ammo here by taking the weapon. When Reznov will say that it is quiet; there will be Germans waiting to ambush the player when entering the area where there is a long low wall of makeshift items that create a barrier, toss a grenade and move a little further so they will spawn. They will only spawn when the player is close enough.

That should take care of most of them. The battle should be quick, and using grenades and Molotov Cocktails will speed it up. Proceed to the next area, it should have many Germans shooting Panzerschrecks from the rooftops, they are also armed with Gewehr 43s. Try to kill the Panzerschreck users first, but move to the left for there are Germans with a mounted MG42.

There is also a stockpile of some Panzerschrecks and a Gewehr 43 to the adjacent room to the right of the open balcony area. Once majority of them are killed, proceed onwards to the next area, it should have a heavily sandbagged mounted MG42, quickly kill the gunner by tossing a cooked grenade or shoot through the tiny look-hole. Either way, with him gone, one can easily eliminate the rest of the Germans in the area. Exit this area and enter the next. The player should be outdoors and see Germans fleeing from T-34s.

Keep moving forward. They will usually retreat, but can still be fired at. The player is in fact able to ride on the T-34’s MG turret, this is a better option on higher difficulties if one does not want to walk and get shot by enemies (though, the player can still be damaged while in the turret). Once the Commissar announces his speech, the mission ends. 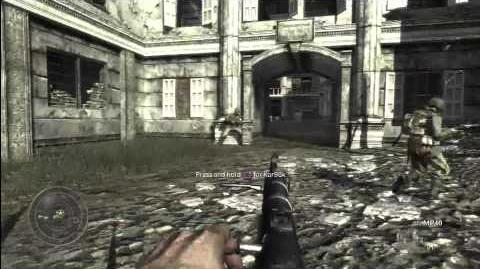 Call of Duty World at War - Campaign - Ring of Steel

Fighting in the level.

) - Complete 'Ring of Steel' on Veteran difficulty. (Solo only).