For other uses, see Shield.

The shield will deflect all enemy bullets, but the impacts will leave large cracks across the front of the shield, until the game reloads the image (it could overload the game eventually if it does not do this). The shield also greatly reduces explosive damage if pointed in the right direction, enabling the player to survive grenades and Claymores with little trouble. In some ways, it makes Blast Shield unnecessary; however, any hostile Semtex that sticks to the user is lethal (therefore prompting the use of the equipment). In addition, it renders the user immune to the effect of Stun Grenades (in front), similar to Blast Shield, but not against Flashbangs. Players currently holding the Riot Shield cannot go prone, knife, or place a breaching charge.

Because of the way the shield is held, the player's right side tends to be more exposed than the left, and sprinting with the Riot Shield will shift it even more to the left. This vulnerability can be circumvented by running at an angle.

The Riot Shield is used by various enemies in certain parts of the campaign. It's first appearance is in "No Russian" when the FSB arrive to counter Makarov's terrorist group. It is then featured in later missions with Russian heavy assault troops in "The Gulag" and Shadow Company soldiers in "Just Like Old Times".

Using flashbangs, as with all enemies, will cause Shield-wielding enemies to stumble, providing an opening to shoot or engage in melee combat. An interesting tactic is to equip a Riot Shield and melee just as the enemy attacks as it takes two hits to kill an enemy with the Shield. Fragmentation grenades or a Grenade Launcher are also effective weapons if aimed behind or next to the Shield. Another method, although not widely preferred, is continuously firing at an enemy's Shield until he wears down, he will then be open for a kill shot in the leg. Thermal sights are also effective, as forms a white rectangle with the areas exposed appearing around the edges. This tactic is particularly effective in "Just Like Old Times" as smoke grenades and conveniently placed weapons make it likely to already be equipped.

Spawning with a Riot Shield as a primary weapon will slow down movement at all times. When looking at a player that has a Riot Shield equipped, they appear to have additional pads/armor on them as well as a helmet. The additional armor is purely cosmetic. This is likely the real reason behind the very slow movement of players using Riot Shields, as the effect does not disappear when the player drops the Riot Shield.

The Riot Shield does have a number of offensive capabilities, such as a melee attack, in which the player bashes an enemy with the shield, two of which (one in Hardcore) will kill an enemy. However, using this melee ability can expose the wielder to knife attacks. Bullets can also ricochet off the Riot Shield and kill enemies, which can be seen here. Deflecting enemy bullets with the shield will give a player bonus experience points, but the effect decreases over time to prevent abuse.

Unlike the enemies in the campaign, the player cannot use a weapon while wielding the shield. Switching to a secondary weapon places the shield on the wielder's back, which offers some limited protection. However, when engaging an enemy, switching from the Riot Shield to a secondary weapon takes a considerable amount of time and is one of the greatest risks of using Riot Shields.

It should also be noted that the Riot Shield can block gunfire from several killstreaks including the Harrier, but the shield is useless against the Chopper Gunner and AC130 killstreaks. Although it protects against many things, it cannot protect the user against a falling Care Package. It can also protect a player from Predator Missile's direct impact. To do so, the player must switch to his or her secondary and lie down. The missile must hit exactly at the shield on the player's back, and the impact will still cause heavy damage.

The Riot Shield is prominently featured in Special Ops missions such as "Terminal" and "Breach & Clear".

The Riot Shield in first person

Third-person view of the Riot Shield

Another view of a Riot shield user in Final Stand

An FSB operative deflecting bullets with his Riot Shield

) - Use a riot shield to beat down an enemy in single player or Spec Ops.

A Riot Shield is used by John "Soap" MacTavish.

The Riot Shield in a first person view.

The Riot Shield was first seen in the Survival Mode trailer in Call of Duty: Modern Warfare 3.

The Riot Shield appears in Multiplayer in a similar fashion to the Call of Duty: Modern Warfare 2 variant in which it never breaks. It is unlocked from the start of Multiplayer. It can be equipped with either the Melee or Speed Proficiencies. Melee Proficiency is good if the player wants to kill enemy players faster, or when the first attack misses. When the Juggernaut Recon pointstreak is used, the player will be automatically granted a Riot Shield, a USP .45 and a Smoke Grenade. The shield also releases concussive like effect when striking an enemy, causing them to be temporarily stunned. In this stunned instant, they cannot use weapons, melee, or equipment, but can still be mobile at full speed. When in this state, it can be easily recognized that they are covering their eyes with their left forearm.

The Riot Shield only breaks in Special Ops when it absorbs too much damage and can only be fixed by switching to another Riot Shield or buying a new one.[1] Bashing enemies with the Riot Shield is more effective than knifing them as it deals out more damage than the knife.

Juggernauts sometimes carry Riot Shields during later waves. There are two ways to make them drop it: when sufficient damage is inflicted, and when the player tosses a flashbang. When this happens, they will attack the player as a normal Juggernaut would. The dropped Riot Shield can be picked up, though it can take very low damage before it breaks.

Additionally, a group of friendly NPCs wielding Riot Shields can be called in to assist the player(s) for $5000. 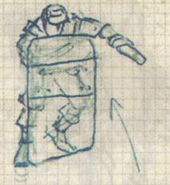 "Frags/Claymores most effective behind/beside shield. Use semtex on shield if available"

A Juggernaut with the Riot Shield

The Riot Shield in first person

A Player using the riot shield in third person view

8
The Riot Shield returns in Call of Duty: Ghosts.

The Riot Shield is only available in the mission "End of the Line", where it is used by Federation soldiers.

The Riot Shield can be selected as a primary weapon as with past Call of Duty games. It may now equip one attachment of the player's choice.

The Riot Shield differs from its predecessors in many ways.

Prior to the February 20th patch, the Riot Shield behaved differently when throwing explosives. Rather than the third-person character briefly exposing themselves to throw something, as in previous games, it would be thrown around the side of the shield and the user would not be exposed to gunfire. The first person animation would show the shield being moved away, but bullets would continue to be blocked. This resulted in the 'Riot Shield-Danger Close-C4' class, where a player could crouch to block almost their entire body and throw C4 without worrying about being exposed to enemy fire while doing so. The update changed this mechanic back to the one used in previous games where the shield would be moved momentarily when throwing explosive equipment, allowing enemies to damage the player from the front. However, the throwing animation when using other equipment, such as the Throwing Knife, remains unchanged; in first person the shield will be moved as usual, but the third person model will only show the character's hand sticking out slightly to the side. As such, this tactic remains viable when using the Throwing Knife, albeit much more difficult and requiring a great deal more precision than with something like C4.

The Riot Shield appears in Extinction under the Equalizer category, labeled as Crowd Control. It costs $700, making it the cheapest Equalizer available. The Riot Shield has 10 health by default, and the current health of the Riot Shield will always be shown in the bottom left corner of the Heads-up display, just above the health and armor bars.

The final upgrade heavily improves the Riot Shield's standalone potential even more, as successful shield bashes will cast an incendiary effect on any Cryptids that survive a bash, and the shield health is increased even further to 25.

As an Equalizer, the Riot Shield's biggest selling points are its very low cost, the passive effect of blocking hits from the rear when stowed, and the non-reliance on upgrades. These combine to make the Riot Shield a very lucrative and common option for those that don't want to use Equalizers, as the Riot Shield will still be able to do something without devoting a lot of time nor practice into its usage. 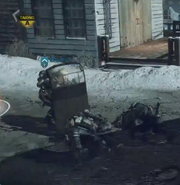 A player using the Riot Shield

The running animation of the Riot Shield

It also appears in Call of Duty: Heroes, used by the Riot Shield Juggernaut.

The Riot Shield appears as a builadable in the Zombies maps Classified, Alpha Omega, and Tag der Toten.

Blueprint of the Riot Shield as seen in Classified. 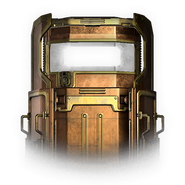 The HUD icon for the Riot Shield

The Riot Shield appears in Call of Duty: Modern Warfare.

Unlike previous iterations, the bulletproof glass will not have shattered cracks after blocking and ricocheting bullets. This change allows players to not be obstructed, but the glass itself appears more faded and less clear than before.

The Riot Shield in first person.