The Ripper, known as the EvoPro III within game files, is a bullpup submachine gun featured in Call of Duty: Ghosts, and that makes a smaller appearance in Call of Duty: Infinite Warfare as an Epic Prototype Weapon.

"The latest in modular weapon design with an integrated Hybrid Sight that toggles between SMG and AR combat modes."
— Description

First announced March 5, 2014 it was initially available only to Xbox season pass holders starting March 6, but was released with the Devastation downloadable content pack. It was also released for PS3/PS4 Season Pass holders on April 4, but was available when Devastation came out for PS3/PS4 on May 8. The weapon is also available for individual purchase on all platforms for $3.99.

The Ripper is a DLC weapon that costs no squad points. Once the DLC is installed, the weapon will be available to all squad members.

When aiming down the sight, press the button displayed on screen to switch sights.

The range of these values is dependant on what mode is in use. In SMG mode, the Ripper's three hit kill range is the shortest in-class, with drop-off commencing at a little under ten meters, and its four shot kill is lost after about eighteen meters, which is actually average for the class. In AR mode, however, the Ripper has the longest three hit kill range in its class, losing its three hit kill after 24 meters, and losing its four hit kill after a monstrous 46 meters. In ranged engagements, the Ripper should be transitioned into AR mode in order to maintain competence at a distance.

The Ripper's rate of fire is different depending on what mode is currently in use. In SMG mode, the Ripper is second only to the CBJ-MS, firing at 967 RPM. However, fire rate in AR mode is the worst in-tier, at 674 RPM. In close range engagements, the Ripper should be transitioned into SMG mode in order to maintain competence up close.

The Ripper has one set of sights for each firing mode: SMG mode will have a white post indicating the point of aim behind a vertical black rear sight, similar to the SCAR assault rifles. This sight has a low zoom level. AR mode will have a green and rectangular electronic sight encompassed within the two vertical black bars that split apart when transitioning from SMG mode, with a green dot indicating point of aim, and the sight will have a higher zoom level.

The Ripper's handling characteristics are another constant between both modes. The aim down sight is identical in SMG and AR mode at a worst in-class 250 milliseconds, and the Ripper will move at 100% of the base speed. The Ripper also has slightly larger hip-fire crosshairs than the SMG default. The Ripper reloads at a reasonable pace, taking 3.1 seconds to do a partial reload, 3.3 seconds to do an empty reload, and 1.7 seconds to perform a Reload Cancel. This is average for the SMG category. As a whole, the Ripper will generally handle somewhat worse than the other SMGs.

The Ripper has a worst in-class magazine capacity, tied with the Vector CRB and K7 at 32 rounds per magazine. Although not bad, the Ripper's magazine capacity is smaller than all other SMGS bar the previously aforementioned weapons. The player will spawn in with three magazines total, two in reserve and one already loaded into the weapon.

The Ripper has a limited assortment of attachments, as all optical attachments cannot be used with the Ripper. The Flash Suppressor will reduce muzzle flash when using the Ripper. The effect is of minor utility on the Ripper as the sights themselves will be rarely obscured by muzzle flash. The Silencer will both remove muzzle flash and keep the Ripper off radar, but the Ripper's range in both modes is reduced by 25%. The attachment affects the SMG mode minimally due to its very short range values, but the AR mode will see a very large reduction to three and especially four hit kill ranges. Conversely, the Muzzle Brake will boost all range values between both modes by 25%. In AR mode, this makes the Ripper have a four hit kill so long that the Ripper will only be a five hit kill in AR mode at ranges where players may have significant trouble seeing targets.

The Foregrip reduces recoil values by ten percent, making the weapon easier to handle. This attachment isn't of great use to the Ripper, as its recoil profile requires minimal input from the user to remain accurate.

Extended Mags will increase magazine capacity to 48 rounds, and boost the starting ammo loadout by fifty percent. Armor-Piercing Rounds will allow the user to slice through Juggernaut Suits and Ballistic Vest users with quick work, as well as deal more damage to scorestreaks. Rapid Fire will boost the fire rate in SMG mode to 1153 RPM and the fire rate in AR mode to 800 RPM. The Ripper in SMG mode will be one of the most formidable weapons in CQC to square up against, while the Ripper in AR mode will be able to more competently contend with assault rifles in its three and four hit kill ranges.

Just like the Maverick in Nightfall, the Ripper is available in Mayday, in addition to being available on Awakening and Exodus. The Ripper costs $1500.

On Mayday, the Ripper holds immense value since it is the most versatile weapon that players can purchase in the first area for $1500. The Ripper is cheap, and its two modes make the Ripper competent up close and at a distance. The Ripper's competence at longer ranges is especially relevant on Mayday since the map is lacking in terms of assault rifle options and the Kraken boss fight is one that is more of a ranged battle with less of an emphasis on CQC. In either mode, the Ripper handles very well, making it an ideal choice for players that aren't Weapon Specialists. Even players who are Weapon Specialists can come to appreciate the Ripper's versatility. The Ripper in SMG mode is a lethal weapon when under the influence of the Weapon Specialist Upgrade.

The Ripper in AR mode (with a Muzzle Brake)

Aiming down the sights while in SMG mode

Aiming while in assault rifle mode

Another view of the Ripper

The Ripper is available as a Prototype Weapon in Call of Duty: Infinite Warfare, as the Epic variant of the RPR Evo submachine gun. The variant has the name and appearance of the Ripper from Call of Duty: Ghosts. Unlike the version from Ghosts, optical attachments can now be equipped on it. As it is a Prototype Weapon, it features two gun perks; Reckless (only applies to SMG mode) and Focus.

The Ripper in SMG mode 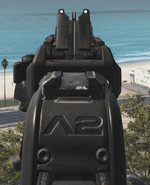 The Ripper in AR mode 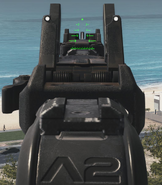 Aiming while in AR mode