"Find out why the facility on Jupiter's moon Europa went dark."
— In-game description

"SCAR operatives destroyed classified weapons technology from the compromised UNSA blacksite, but were intercepted by Admiral Salen Kotch. All 3 SCARs and the pilot of their transport have been confirmed KIA. We now know the SDF objective was never classified weapons, but data to aid a sleeper cell in Geneva."
— AA-Report

"Rising Threat" is the first campaign level in Call of Duty: Infinite Warfare.

A three-man team from SCAR Team Seven are sent to investigate the sudden loss of contact with the UNSA R&D Facility located on Europa. Led by Dan "Wolf" Lyall, the three manage to skydive from their transport onto the surface of Europa, infiltrating the main facility.

After the group obtains the F-SpAr energy weapon prototype, Lyall uses an F-SpAr Torch to assist in escorting the weapon as the group is ambushed by several SetDef troopers and C12s.

The group is forced out of an airlock onto the surface, where Salen Kotch arrives for a brief interrogation. After offering his views on leadership, Kotch leaves the group to die, having Bradley Fillion beat Lyall to death.

Kotch killing one of his men. 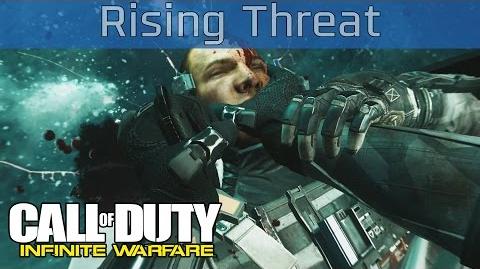