"The older guys like Miller, Sgt. Sullivan and myself, we're known as "The old breed". "Old"... we're not even out of our twenties."
— Roebuck in Little Resistance

Sergeant Roebuck is an American squad leader of the United States Marine Corps in Call of Duty: World at War. He is voiced by Kiefer Sutherland.[2] He is mentioned by Robert McNamara in Call of Duty: Black Ops 4 within the Zombies map Classified.

Roebuck is part of the invasion force that assaults Makin Island. He and the rest of his unit come to rescue Miller and his reconnaissance team on Makin, stabbing the would-be killer in the back. Along with Sullivan and the other Marine Raiders, they raid the island, rescue their support squad and escape Makin Atoll.

Two years later, Roebuck, Miller, Sullivan and a new recruit named Pvt. Polonsky participate in the invasion of Peleliu as part of the 1st Marine Division. They make way for Allied forces after clearing Japanese defenses but Sgt. Sullivan gets stabbed by a Banzai Charger at the end of the level. Roebuck is promoted to Sergeant during the landing on Peleliu and takes command of the squad.

He takes part in capturing Peleliu airfield and crushing the remaining Japanese forces there. After Peleliu, he leads Miller, Polonsky and several others in the invasion of Okinawa. After clearing Wana ridge, they receive orders to storm Shuri Castle.

After fighting through numerous Japanese soldiers they storm Shuri Castle and come across Japanese forces attempting to surrender. He and Polonsky move in to secure the soldiers that pretend to surrender, only to get attacked by them. He could live or die according to the player's actions.

Towards the end of "Breaking Point", a group of three Japanese soldiers pretend to surrender. Roebuck and Polonsky both walk up to them and turn towards Miller, giving the Japanese a chance to strike. Roebuck, who is in between two soldiers, calls for help, as does Polonsky.

A faster trigger finger and better aim are required to save Roebuck as he has two enemies holding him instead of one. If Miller saves Roebuck, Polonsky is killed and Roebuck will kneel by Polonsky pleading him to get up and will shout, swear and curse at the attacking Japanese while firing at them with his Thompson. After the Japanese are defeated, he gives Miller Polonsky's dog tags and repeats what he said in the last line of the introduction of the mission.

Roebuck dies, and Polonsky survives. Polonsky then proceeds with a similar reaction to Roebuck's if the former died. Polonsky then joins Miller in holding off the last of the Japanese.

) - In the final battle for Okinawa, save Sgt. Roebuck. (Solo or co-op)

When walking through the Pentagon as Alex Mason, a portrait of Roebuck can be seen. His picture and pictures of World War II battles can also be seen in "Five". In Rebirth and "Five" Roebuck's body can be seen in the labs, although it is unclear if it's canon or just his textures.

Polonsky and Roebuck in a crater. 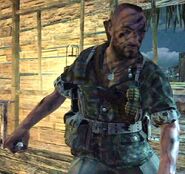 Corporal Roebuck during the rescue mission to find Private Miller. 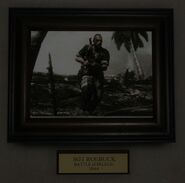 Sgt. Roebuck and Polonsky as seen in Call of Duty: World at War: Final Fronts.