Rojas' assistant is a character in Call of Duty: Modern Warfare 2. He is an assistant to Alejandro Rojas.

He is seen during the level "Takedown", leaving his apartment as two angry local militiamen approach it. He appears to be trying to be nice at first and shouts at them. However, once they get close to him, he quickly pulls out his Desert Eagle and eliminates both of them, as well as a third who was trying to take him by surprise. He also notices the car carrying Roach, Soap, and an unnamed driver (usually just called "Driver"), who were tailing the van driven by the three militia.

He then opens fire and kills the driver, almost killing Roach (but fails to) making the rest of Task Force 141 move to pursue him. He flees in panic into the streets of Rio de Janeiro, with civilians alarmed by gunfire. He is captured after being shot in the leg by Roach. Captain MacTavish then tells Roach, Meat, and Royce to keep searching for Rojas in the slums, while Ghost uses cables on a car battery to "interrogate" the assistant. 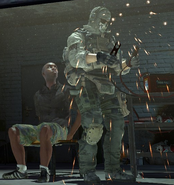 Rojas' assistant, just prior to being tortured by Ghost.

Rojas' assistant draws his Desert Eagle to shoot at his would-be captors and at the player's car.