For the character from Call of Duty: Infinite Warfare, see Radoslav Barkov.

"I am here to bring law and order to this land, and no terrorist thief will harm my country! I will protect Russia!"
— Roman Barkov

General Roman D. Barkov (Russian: Роман Д. Барков) is a rogue Russian army general, who leads an army of loyalist soldiers and mercenaries to maintain control of the country, Urzikstan, in order to protect Russia from terrorists, and the main antagonist of Call of Duty: Modern Warfare.

Roman Barkov grew up in a town on the coast of the Black Sea in the Soviet Union. During his teenage years, Barkov took care of his elderly mother and would often shop and cook. Hindered by reading disabilities, Barkov tried but failed to complete trade school. Having developed an inferiority complex, Barkov longed to find excitement and feel power.

Roman entered the Soviet Army illegally at the age of 16. Needing cooks, they accepted him for admission as his only marketable skill was the cooking he had learned at home. He also learned how to fire machine guns and anti-aircraft batteries. Barkov enjoyed destroying targets, logging more range hours than his comrades. It was the first time in his life he'd been good at anything "strong". Roman continued climbing the ranks making him feel invincible.

In 1999, as a lieutenant, Roman Barkov led coordinated assaults on villages in the resource rich region of Northeastern Urzikstan in what was carefully called "The Annexation" of the neighboring country. Seeing Urzikstan as a "breeding ground" for terrorists, and willing to do anything to protect his homeland, Barkov deployed chlorine gas-tipped bombs and unknown nerve agents. Their deployment was unauthorized by the Russian leadership. The rogue attacks sent civilians streaming into local hospitals which were then struck by Russian warplanes.

One of those villages was Riyzabbi, the hometown of Farah Karim and her family. During the attack of their village, Farah was extracted from rubble while her mother laid dead. Her father, Walid, took her to their home as gas was released. Her brother, Hadir, was waiting for them. As they were ready to leave, a Russian soldier entered their home and killed Walid. The two siblings killed the soldier before fleeing the house. Farah and Hadir found a truck and were about to flee their village before being captured by Barkov himself who sent them into a prison camp.

Within hours, Barkov's Forces took control of the entire country. This victory gained Barkov ultimate favor with his superiors and earned him the rank and title of General.

Knowing the West must turn a blind eye to his army's atrocities, as direct conflict between the superpowers risked an all out World War, General Barkov's unchecked tactics, held Urzikstan under martial law. Now controlling the country, Roman Barkov proclaimed himself "Novyy Korol" or New King.

Seeing any and all rebellion or defiance as an insurgency and their perpetrators as terrorists, Barkov ordered scientists to combine existing weaponized chemicals to achieve three objectives: zero detectability, foiling of protective gear and 10 times the lethality in order to achieve his ultimate goal to rout out terror at the source.

In 2009, inside the Tobrak prison camp, Farah Karim started a resistant movement and sent messages to the West as "Commander Karim". Barkov wanted to know who was "Karim", tortured Farah until the prison was attacked forcing Barkov to leave the area.

During Barkov's retreat, Farah led an insurgency inside the prison with other female inmates. They were soon joined by Lieutenant John Price and other SAS operatives behind the attack who were looking for "Commander Karim". With the help of the SAS, Farah saved Hadir as the warehouse he was in was on fire. They then managed to take control of the prison camp.

Price told them to camp in the north of country and avoid the highway. Now free, Farah created the Urzikstan Liberation Force starting a massive insurgency against Barkov's regime that would last for the next ten years.

Attack on the Al-Raab Airbase

On October 24, 2019, the CIA launched a mission to confirm and retrieve a shipment of chlorine gas in a warehouse used by Barkov located in Verdansk, Kastovia. However, the gas was stolen by a group of insurgents during the mission and was now in the wild.

Two days later, "Alex", a CIA operative, was sent in Urzikstan to meet with Farah Karim and the ULF in order to find the stolen gas. Farah accepted to help the CIA if "Alex" helped the ULF taking out the Russian airbase in Al-Raab. After creating a diversion inside the town of Aqtabi during a televised speech of Roman Barkov, the ULF launched an attack against the Al-Raab airbase and took control with the help of the CIA. The loss of the airbase temporarily limiting Russian air capability in Urzikstan.

On November 1st, Hadir Karim and members of Al-Qatala attacked Barkov's home in Baurci, Moldova while Barkov was away. Hadir was apprehended by John Price and Kyle Garrick and was then handed over to Russia. However, Hadir gave them the location of Barkov's gas factory and Price convinced Farah to attack the facility with the ULF.

Two days later, on November 3, the ULF led by Farah, John Price, Kyle Garrick and "Alex" and supported by the CIA and "Nikolai" launched an assault against Barkov's chemical factory in Bojormi, Georgia.

General Barkov fled the facility and watched the assault from a flying helicopter ordering his soldiers to fight and the insurgents to surrender. General Barkov attempted to call for help from Moscow in order to get Russia's support in dealing with the so-called terrorists, but is told that they were ignoring him, presumably because they found out from Hadir about what he did in Urzikstan. As an outraged Barkov refused to accept this, Farah managed to sneak into the helicopter while "Nikolai" was flying it.

Farah sneaked behind the General and stabbed him in the shoulder. Barkov reacts by elbowing her backwards and onto the deck, grabbing hold of Farah to try and strangle her, instantly recognizing the woman. Farah removes the knife from Barkov's shoulder and stabs him again, causing him to fall backwards onto the deck. As the General tried to bargain for his own life in an attempt to get his gun, Farah continued to stab him until Barkov could not move anymore. The dying general expresses no remorse for his actions, content that he did what he did for the good of Russia. Barkov then either dies of his wounds or when Farah kicks him out of the helicopter.

Sometime later, Kate Laswell met with John Price in a tea house where she informed Price that Russia disowned Barkov to which he replied "Well they didn't have much choice, did they? He's dead." Price also learned that Victor Zakhaev now wanted Barkov's throne prompting him to create the Task Force 141. 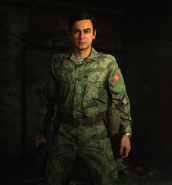 Younger Barkov as he appears in Captive. 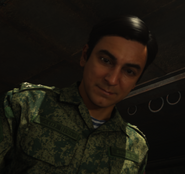 Barkov watching down on Farah.

Propaganda posters of Barkov found in the mission Embedded and Verdansk.