For other characters, see Rook.

Rook was an Australian member of Task Force 141. He participated in the mission to bring down Vladimir Makarov at the U.S. Vehicle Disposal Yard 437, 160 miles southwest of Kandahar, Afghanistan.

In Call of Duty: Modern Warfare 2, Rook was tasked with the assignment of assisting Captain Price and Captain MacTavish in tracking and taking down Vladimir Makarov. He met up with Captain Price to acquire transport so that the team could link up with Nikolai's C-130 and exit from the area.

While Rook drives Price to where they meet Soap before attempting to escape, he shows exceptional skills at driving, managing to knock aside several much larger enemy Shadow Company Technicals off the road using an Ultranationalist Jeep and tipping them without player involvement. Eventually though, Rook is hit by a bullet from a parallel enemy SUV, killing him. However, with Rook's foot still pressed on the gas, Soap steers the car from the passenger seat into the C-130 transport plane that Nikolai is piloting.

Rook with an AT4, waiting for Soap. 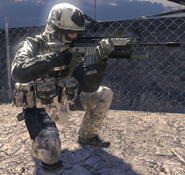