Call of Duty Wiki
Register
Don't have an account?
Sign In
Advertisement
in: Call of Duty: World at War Marine Characters

For the Zombies character, see Michael Rooker.
"Relay the message to Major Gordon, The Artillery on the Point has been knocked out."
— Rooker in "Relentless"

Sergeant Devan Rooker was an American soldier of the United States Marine Corps during World War II. He is seen in Call of Duty: World at War.

Rooker was the radioman of the Marine Raiders rescue team led by Sgt. Tom Sullivan and Cpl. Roebuck, which made a raid on Makin and saved Pvt. C. Miller. Later during the assault, the squad find a bunch of "dead" Imperial Japanese soldiers in the jungle. Sergeant Sullivan told Rooker to call another squad with his radio, in order to check if they already cleared that area.

When Rooker was going to use his radio, a signal flare rose, blinding everyone. Rooker was then stabbed by a Japanese soldier wielding a katana. His "body" was left behind in the ensuring chaos. Despite this he later returns in Relentless where he assists in clearing out the caves towards the end of the level, apparently having been promoted to the rank of Sergeant in his time away.

In Semper Fi he uses an M1 Thompson and in Relentless he wields an M1 Garand. During combat he made also pull out his M1911 sidearm like most other AI soldiers. 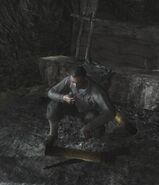 Rooker about to get stabbed by a Japanese soldier.
Community content is available under CC-BY-SA unless otherwise noted.
Advertisement