"Born to poverty and raised by the city streets, Rosa knows what it's like to live under oppression. Since then, she has dedicated her life to ridding the world of the criminals who once ruled her life, and those like them."
— In-game biography

Rosa is a character featured in Call of Duty: Mobile, introduced in the Season 3: Tokyo Escape Comics and was released as a playable character on June 11, 2021, during Season 4: Spurned & Burned as part of the Drillhead Draw. [1]

Rosa served as an agent to both the Drug Enforcement Agency and the Central Intelligence Agency, working against various drug cartels in Mexico. She specializes in stealth, sniping, and infiltration. At some point, she was contacted by John "Soap" MacTavish and met with him, who offered her a new job - working alongside the United Anti-Terrorism Coalition.

Working with the UAC

Rosa would later be present at a meeting with the remaining UAC members, of whom included Soap, General Shepherd, Captain John Price, Alex, and Charlotte "Charly" Johnstone. There, Price informed her that she and Charly would be accompanying his team to Texas.

As the UAC arrives in Texas, Rosa remarks that she was just across the border when Soap was sent for her, and that Price could've simply told her to meet him there, though Price wasn't going to let her miss the chance to meet the team. They then enter the facility to begin their mission.

Once inside, things seem tame for a bit until it's revealed that it's an ambush set up by Templar to lure the group here. She engages, but is thwarted by Templar's consort Dame, and is disarmed of her weapon. Refusing to go down without a fight, Rosa draws a knife to challenge the duo, but is ultimately defeated like the rest and is then chained to a pipe to prevent her escape.

She is seemingly knocked out when Dame looks over her, doubting that she's actually unconscious. Rosa then spits in her face, which causes an angered Templar to punch her across the face, but she merely mocks him in response. Afterwards. Gabriel Rorke shows up to greet the group.

As Price and Rorke talk, Mace suddenly breaks the pipe that he's chained to and attacks Rorke, which in turn allows Rosa to get free of her binds. She then attempts to reach for a discarded gun on the floor, but is then knocked back along with Mace by Rorke using the same pipe.

Having had enough of toying with them, Rorke draws his gun to Price's head and demands Adler's location, only for the latter to reveal himself. Rorke mocks him for having come to him so soon, but Adler states he's brought backup, along with an "old friend". The old friend is revealed to be Ghost, apparently alive and accompanied by the Ghosts' German Shepherd Riley--something that leaves everyone, including Templar, in shock and denial.

Ghost proceeds to engage Templar in a vicious duel. During this time, Rosa sets about setting Price and Charly free. At the same time, she assists the rest in attempting to prevent Rorke from escaping. However, as they make their way back outside, they stumble upon what seems to be the body of Mara, apparently killed. Ghost is most adversely affected by it, and she is present with the rest when they mourn the loss of their comrade. She later accompanies Price and Adler's team to the Ghosts' ship, where they try to stop Rorke from escaping, but to no avail.

Later on, Rosa is then briefed by Price that Rorke and his group have made it to Panama, and he wants her to go undercover on a mission to stop Rorke alone. Rosa expresses her doubts, especially since she has no immediate backup, but Price notes her efficacy in combat, her bilingualism and her relatively new appearance should allow her to be able to do so. He then tells her that Rorke has met with a local arms dealer named Boss, whom is apparently "very bad news". Rosa finally agrees to take the assignment, but not before she demands that Price give her "lots of hazard pay".

Rosa meets with Rott, and he confronts someone (possibly one of his buyers) about lying to him and then setting him on fire with his lighter after his men douse him with gasoline, also commenting that he likes playing with fire. He asks Rosa if she is fine with it, and she remarks she suddenly has a craving for bacon, to which Rott replies he is vegetarian, but didn't want to waste good murder. Rosa then attempts to make a deal with Rott for some FHJs, although she attempts to bargain, Rott shuts it down, warning her of what happens to people who waste his time. Rosa agrees to the deal, and later makes haste to find the intel.

Rosa soon infiltrates the compound and finds a briefcase. But before she can exfil, she is ambushed by Dame who nearly impales her with a sword. However, Rosa manages to gun her down and kicks her aside. Unfortunately, she is stopped from finishing her off when Rott and his men arrive to investigate. With her cover blown, Rosa immediately makes a run for it by leaping onto the roofs on the buildings outside. Rott orders his men to stop her from reaching the docks.

As she leaps onto another roof, Rosa is blindsided by Rott, but manages to hang onto a ledge, while Rott falls off into the building when he tries to avoid her gunfire. Rosa continues to leap, and catches her eyes on the men on the bikes pursuing her. Before long, she manages to snag one of the bikes and take off, although not before Rott recovers and sees this and takes another bike to pursue her. As the chase ensues, both of them exchange fire. Rosa rides to the edge of a cliff, where a helicopter with Ghost is waiting. Ghost manages to grab her mid-air and Rott is forced to abandon his pursuit. Ghost is impressed by Rosa's skills, to which she replies that girls' got to have fun.

Rosa is later seen in the briefing by Shepherd regarding the Five Knights. Afterwards, Rosa is assigned to Price’s team where they will infiltrate the island with the intention of taking out the remnants of the Five Knights. During the infiltration, Rosa notes how Price is getting careless as she had to save him from a hiding guard. As they take out several more, Price suspects something is up as they have cleared the entire place but Hidora Kai is nowhere to be found, to which Rosa replies that it is “tricky tricky”. They then break open a cracked wall and barely manage to avoid gunfire.

The group later encounters the waiting Hidora. Demir gets shot when he attempts to shoot Hidora, prompting Rosa to lunge at him. As she taunts Hidora, she kicks away his gun, but he swiftly responds by slashing her across the cheek with his sword.

Down for the count, Rosa can only lay back & nurse her wound as Price checks on her, saying she’ll live, probably. 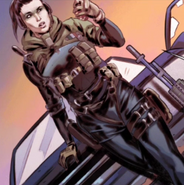 Rosa in the Comics.

Rosa among the remaining UAC members.

Close up of her face.