ISO, any weapon obtained by the player

Rozlin Helms, also known as Roze, is a Shadow Company operator of the Allegiance faction featured in Call of Duty: Modern Warfare. Roze was released on July 14th, 2020 during the Season Four of Modern Warfare as part of the "Roze Operator Bundle".

After severing ties with the U.S. Army Rangers, Rozlin returned to support her family and her ailing father. She was periodically in contact with Mace, who left the Army after abandoning his post in protest of combat orders he deemed illegal. Mace helped Roze gain entry in Viktor "Zane" Metiko's Jackals mercenary group. She later left the Jackals and joined the Shadow Company while remaining on cordial terms with Mace.

When the Allegiance intercepted comms traffic attributed to Victor Zakhaev coming from the city stadium, Marcus "Lerch" Ortega and a small crew of Shadow Company operatives arrived in Verdansk as Roze was rigging the stadium roof. Once the roof was blown off, the team landed inside the stadium to hunt down Zakhaev.

Roze appears in Call of Duty: Mobile and was added on November 30, 2020, during Season 12 Going Dark as part of Roze Bundle for the Cyber Monday sale.

Roze Operator intro as Shadow Company with the release of Season Five.

Roze next to Marcus "Lerch" Ortega. 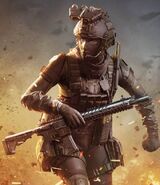