"Mountaintop Mayan temple. Hunt or be hunted in close to medium engagements."
— Description

Ruins is a multiplayer map in Call of Duty: Ghosts that is available in the Devastation DLC pack.

The map is almost completely close-medium range with the exception of the middle building of the map which can provide a somewhat sufficient sniping spot. Therefore, the map is best for submachine guns, shotguns and assault rifles. The close-range weapons may work better, as the map is mostly close-range; the only real medium range areas are the middle of the map in front of the building building with the sniping spot and behind this building.

Go to the eastern edge of the map above the Federation spawn and look southeast at a temple off the edge; the Extinction Egg will be hanging on the ceiling inside that temple.

A view of the volcano outside of Ruins

Render of a Predator statue.

A view of the map (with Predator statue) 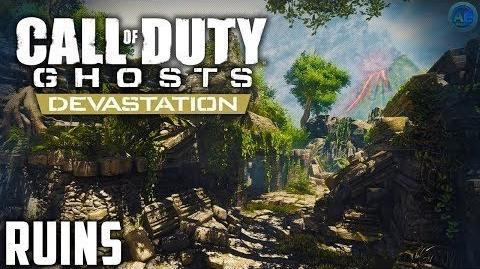