Knife, Gas Mask, any equipment obtained by the player

"If he's active, something big is gonna happen. Something that could shift the balance of the Cold War."
— Adler about Perseus

Special Officer Russell Adler [1] is the deuteragonist of Call of Duty: Black Ops Cold War. He is a CIA agent charged with stopping the mysterious Soviet agent codenamed Perseus. Adler is described as "America's monster" with a "dark charisma".[2]

Russell Adler later joined the Special Activities Division in 1966 and was assigned to the MACV-SOG in 1967 to investigate Soviet activity in Vietnam.

After Vietnam, Adler disappeared from and only sporadically appears in the CIA's records but continued to be affiliated with a number of clandestine operations. His deep knowledge of covert tactics, fluency in Russian and German, and mastery of espionage make him one of the few key operatives that the CIA can consistently rely upon.[4] One such operation was the raid of Rebirth Island, in which he was responsible for capturing and interrogating Vikhor Kuzmin, a Soviet operative in charge of overseeing Nova 6's production on the island. Despite his interrogations, Adler was unable to force Kuzmin to disclose any critical information; in retaliation for what Lev Kravchenko did to fellow CIA operative Grigori Weaver back at the Baikonur Cosmodrome, Adler stabbed Kuzmin's left eye with a knife.

On January 13, 1981, during a mission with Frank Woods and Alex Mason in Turkey, Adler discovered that the Soviet agent Perseus became active and four days later Jason Hudson tasked Adler to build a team to track down and eliminate Perseus. During his mission, he came across an injured operative of Perseus, who he subsequently captured and brainwashed into falsely believing they were a CIA agent who served with Adler in Vietnam, alongside nicknaming the operative "Bell".

Despite breaking through the conditioning, Bell still managed to assist Adler and his allies in stopping Perseus' plot to detonate nukes across Europe. Adler would take Bell to a cliffside, telling them they were a hero for making sacrifices to stop Perseus. Adler would then tell Bell that he had to make one last sacrifice, and that it wasn't personal before both of them drew their pistols on each other. The fate of Bell remains unknown, but Adler managed to survive the encounter and return to the CIA.

Adler would soon find himself confronting Kuzmin again, where would be baited by the Perseus operative into coming to the Mall at the Pines after a raid on a CIA base in West Berlin. Alongside a strike team, Adler arrives at the mall, only to be ambushed by Kuzmin and his soldiers and found Nova 6 barrels. "Stitch" would give the order to kill all of the NATO operatives - save for Adler. A firefight ensued, which ended with Adler being captured by Stitch and transported onto a helicopter.

By April 19th, 1984, Adler was reported by Kapano "Naga" Vang to be headed to Verdansk. At the same time Frank Woods, Karla Rivas , Terrel Wolf and a small strike team chased after Naga and his men near a camp in Laos.

Weeks later, Hudson contacts Wolf for a sit-rep and news on Adler. The team eventually got "skunked" hard but were able to get through heavy firefights in the camps. They eventually found a safehouse where Nova 6 barrels were being stored but upon finding them they were empty and were used to draw in Adler and the Team. They interrogate the remaining bad guys in the safe house and search for intel which all pointed to Verdansk. Hudson orders the team to head to Verdansk and "bring our boy home".

On June 2nd, Stitch has Perseus operatives Freya "Wraith" Helvig and Roman "Knight" Gray retrieve Dragovich's data on brainwashing from a base in Mount Yamantau. In the process, the duo destroyed the site so that the Soviets could blame the United States for the incident. With the data secure, Stitch intends to brainwash Adler and "entire nations" with the same method used by Dragovich and Steiner on Alex Mason.

Adler is unlocked as a playable operator for Multiplayer and Zombies modes by completing the challenge.

Adler is mentioned in several intel pieces in Call of Duty: Warzone. The intels relate to his investigation into Perseus, who had ties with Imran Zakhaev. He is also playable as an Operator with the purchase of Call of Duty: Black Ops Cold War.

Adler could be unlocked for Call of Duty: Mobile as a playable character by playing the Multiplayer Open Beta of Call of Duty: Black Ops Cold War. [6] Later, Adler come back in Season 13 Wint3r War Battle Pass with the uniform Mountain Drab. [7] Adler is also a supporting character in the Comics.

Adler first appears in the Season 11 Anniversary comic. Ghost, who has met up with the rest of his fellow operators in The Club after an EMP attack launched by the Five Knights, is introduced to Adler by Captain Price after he admits that they have no way to combat the new threat presented by them. Adler says that they do have ways to combat the new threat, and then inducts the operators into the United Anti-Terrorism Coalition. He ends off the statement by saying "Ladies and gentlemen, we're going dark."

Adler and the rest of the team start to plan out their assault on Five Knights locations. When asked on how they would coordinate or even reach those locations, Adler presents the team with Swiss mechanical watches, which are unaffected by EMPs. Price also notes that Adler is not the only Cold War relic in operational state in the bunker, indicating an old helicopter. During all of this, a character named Templar is preparing himself, and he appears to have a personal grudge against the operators of the Coalition. The Coalition begins striking 3 key sites of the Five Knights simultaneously; Price and Soap lead an assault team on the Communication Centre, Mara and her team storm in at the Command Center in Alcatraz, while Ghost and Tank strike a production facility in Hackney Yard.

Later, Price, Ghost and Adler discuss the aftermath of their joint operation; Mace is in a Black Site facing interrogation, Templar and Hidora are in the wind, Soap is injured but will be battle ready within a few weeks. It is further revealed that Mara made it out alive, but was wounded badly and is in a coma. Ghost admits that they won the battle and takes an oath that he will "Win the War."

As Ghost expresses grief for not being able to save Tank and the fact that they don't have enough time and intel, Adler comforts him by saying that they do have intel and mentions that there is a place in Siberia from where Makarov possibly got the Nova Gas from. He then says that it's coming all around the same way like it did during his days, and narrates his story. Some time during the Cold War, Adler led a small team into a Soviet facility in Siberia along with his friend Stansfield. They had found out crucial information about something that the Five Knights could also have gotten their hands on, and eventually carried out. However, when tried to exfil, they were surrounded by a large group of enemies, and Stansfield stayed behind to cover their escape, only to be shot dead, which Adler could do nothing but watch in horror. Back in present day, Adler finishes his story by saying that both Stansfield and Tank knew what they were doing, and so should Ghost. When Ghost questions if the research facility is of any more importance, Adler says that there might be something left in there, although it will be a long shot. Ghost agrees and says that he will take it, to which Adler responds that they will have to wait, and Ghost must not rush for revenge. Ghost in response says that this is not about revenge, and they must get the intel before the Five Knights do. Adler replies that they cannot risk to lose any more men as the Five Knights already hit other bases hard, and tells Ghost that he must be patient. Ghost takes it for an excuse to do nothing and walks away, much to Adler's dismay.

When Price cannot find Ghost, he comes to Soap asking for his whereabouts. Adler comes to them saying that he knows where Ghost is, and he is "doing something stupid". When Price asks what Adler has done, he replies that he told Ghost about the operation in Siberia.

Adler reappears again sometime later, arriving on the Ghosts' ship via helicopter. He suspects that as he hasn't heard from Price's team that has been dispatched to Texas to locate Templar, they may have most likely fallen into a trap. He discusses the matter with Captain Merrick, and then later visits their German Shepherd Riley.

Later, Adler is shown to have arrived in Texas, greeting Gabriel Rorke just as he was attempting to get his location out of Price. Rorke mocks Adler for coming to him so soon, to which Adler replies that he's brought backup, which Rorke scoffs at. Adler then says that he's brought an "old friend"--a statement that leaves Templar in denial, as he says "Impossible". The "old friend" is revealed to be Ghost, apparently alive and accompanied by Riley, who shocks everyone with his arrival as he says his famous line, "You can't kill a Ghost". 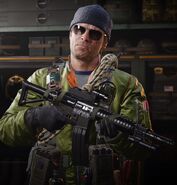 The still used for the Operator Intro Thumbnail

Adler and Farah Karim in Call of Duty: Warzone.

Adler discovers a Perseus operative who would become "Bell".

Adler without his sunglasses, seen in the opening cutscene of The Final Countdown.

Adler stabs Vikhor "Stitch" Kuzmin in the eye, stating "This is for Weaver". 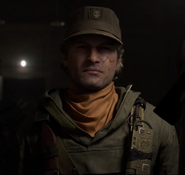 Adler appearance in the Season One cinematic.

Adler is surprised at the sight of Nova 6.

Adler is brought to a helicopter.

Message of the Day teaser on Adler's kidnapping by Stitch.

Adler in the Season Three intro 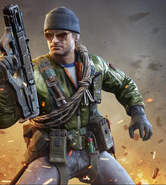 An elderly Adler featured in the Comics.

Adler with a Central Intelligence Agency strike team including Stansfield.

Adler watches in shock as his ally Stansfield is taken down by the Soviets.