In Call of Duty: Modern Warfare 2, The Russian Ground Forces serve alongside the Russian VDV Paratroopers as the main enemy that are faced while playing as Pvt. Ramirez, and appear in all Ranger missions but "S.S.D.D." and "Team Player". The VDV make their first appearance in "Wolverines!", in which they parachute into suburban Virginia and across the East Coast in the first phase of the Russo-American War. They continue to be the main enemy in "Exodus", "Of Their Own Accord", "Second Sun" and "Whiskey Hotel". They are easily recognizable by their red Urban Camouflage uniforms, and some also wear gas masks. VDV forces also make an appearance in Special Ops, where they are the enemies in the missions Suspension, Body Count, Big Brother, Homeland Security, Wardriving, and Wreckage.

In Call of Duty: Modern Warfare 3, the Ground Forces are seen fighting in New York alongside the Russian Navy and Russian Air Force. Later, they form the bulk of the forces invading countries of Europe, such as France, Germany, Czech Republic, and various other countries. Russian ground troops are seen in combat missions "Black Tuesday" ,"Goalpost" ,"Bag and Drag", "Eye of The Storm", "Blood Brothers", and "Scorched Earth".

The Russian Ground Forces appear in Call of Duty: Modern Warfare (2019), where a part of them make up an opposing faction in the campaign known as Barkov's Forces. They are led by Roman Barkov, a rogue general. Barkov's Forces not only consist of soldiers who pledge their loyalty to Barkov rather than to the Russian Federation, but they also consist of mercenaries and other henchmen who work under Barkov's brutal agenda while they illegally occupy Urzikstan.

At the ending, several Russian soldiers are ambushed and killed by the Al-Qatala, led by their new leader, Khaled Al-Asad, who were seen invading Verdansk. They also appeared as minor friendlies in the final cutscene where Sergeant Kamarov along with John Price, Nikolai and Kate Laswell discuss the intel and begin to talk about forming an alliance to fight back Al-Qatala and liberate Verdansk.

In multiplayer, the Russian Ground Forces appear as the Russian FGF and the Allegiance Mil-Sim.

A Loyalist trooper looking around.

A Loyalist trooper armed with an AK-47.

A Loyalist with Night Vision Goggles atop his helmet.

A Ground Force trooper in "Wolverines!". 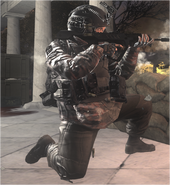 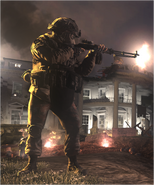 A Ground Forces soldier climbs the ladder of Nate's.

Ground Force troopers file out of a building.

Several Ground Force members work to free their trapped comrades from a BTR-80.

Two Ground Force troopers run out from behind a car. 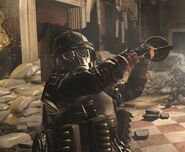 A Ground troop meleeing with his RPD.

A Russian Ground troop in Paris.

On the Streets of Prague.