Call of Duty Wiki
Register
Don't have an account?
Sign In
in: Call of Duty: Black Ops Single Player Levels

"Head to Vietnam and work with old allies to investigate Soviet presence in the region."
— Briefing

"Looks don't count for shit in the jungle. This is 'Nam, baby!"
— Frank Woods

"S.O.G." is the fifth campaign mission in Call of Duty: Black Ops.

S.O.G. team to investigate evidence of Soviet involvement in Vietnam.

Agents Mason and Hudson are already on the ground.

At the beginning of this mission, Hudson informs the player that Woods has arrived. The player then steps outside of their tent to see many helicopters, mostly UH-1 "Hueys" and CH-47 "Chinooks", flying overhead. As Woods approaches, they make jokes about their appearances and walk over to a Jeep. While this happens, the song "Fortunate Son" by Creedence Clearwater Revival is played, presumably from a radio in the tent. Woods then informs Mason of how and when the MACV-SOG was created. As they finish their conversation, bombs explode and their Jeep is overturned, causing Hudson to become disoriented. The player then carries him to a bunker and the actual game play begins. One section involves the player crawling along trenches with enemy flamethrowers blazing overhead. At one point a NVA soldier jumps on the player and the player must repeatedly press the use button to punch him and pull the pin of a grenade on his webbing's. Use of Fougasse Mines (napalm barrels armed with explosives) to hold back the North Vietnamese Army are demonstrated by Woods. The player is given the option to use them as well; 2 detonators can be picked up along the path and detonated on cue, killing many enemies; if the player fails to execute a well-timed detonation, the NVA will continue their advance. Woods will rush to the mounted M60 in the wood pillbox at the end of the trench. Follow the path up to the defensive position and not long after 3 T-55 tanks move over the hill and advancing towards the line; the player then must pick up a M72 LAW to destroy the tanks. One hit will finish a T-55. Continuous waves of NVA will attack, necessitating the player to repeatedly kill those nearest in order to focus on the tanks. When this part of the mission is done, follow Woods to another line under heavy assault.

The player then fights his way down a hill to a weapons bunker and then to the lower ridge to roll 2 drums of napalm into the trench at the bottom. Many players get stuck at this point, as the objective is not clearly defined. However, the conversation Woods has with a pinned down soldier when first exiting the tunnel to the top of the hill makes everything clear. The USMC troops were unable to get the barrels buried like the earlier Fougasse Mines before the assault. Towards the bottom of the hill are two barrels stood on their ends. The player must walk up behind them and press the action button, prompting a short clip where Mason stabs the barrel, scrapes his knife on the top to ignite the napalm, then rolls the barrel down the hill to prevent the NVA from continuing their attack. Until the player completes this, the enemy on this front will keep coming. On lower difficulty, it is possible to run past the enemy and to the right, which skips the barrel objective and allows the player to move on to the next hill.

Once the player completes this, the player must climb another hill while friendly mortars rain down around the player. Near the top of the hill there are a few opportunities to pick up an AK-47 with a Flamethrower. Just as they've made it to the top of the hill, the player will be knocked down and dazed from an exploding mortar and will only have a few seconds after recovering to save Woods from a NVA soldier with his Python.

The player then runs through a tunnel, to a jeep with a mounted TOW Missile launcher that works similarly to Valkyrie Rockets. The player must fight enemies with an M60 machine gun and a China Lake grenade launcher automatically given to him upon entering the jeep, using the TOW to destroy T-55 tanks when they show up. Destroying the six tanks with only six TOW rockets will reward the player with the achievement/trophy Tough Economy. After destroying the tanks, Bowman arrives via helicopter that also has "Fortunate Son" playing. 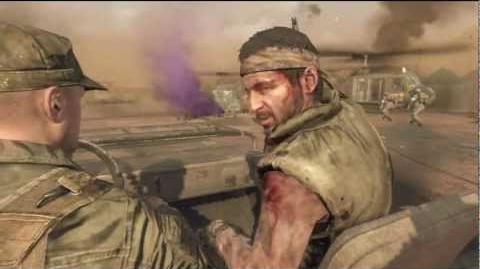 Concept art of the base's interior.

Concept art of the base under attack.

Concept art of the hill.

Struggling with an NVA soldier.

Woods and Hudson at the beginning of the level.

Woods' M16 jamming just before he is attacked.

Woods holding Hudson back before the M113 is hit.

Woods recovering from the jeep crash at the beginning of the level.

USMC Dropped from a helicopter.

Woods and Bowman meet again at the end of the mission.

Mason using an AK-47 with a Flamethrower attachment.

S.O.G. as seen in the booklet for the Call of Duty: Black Ops Soundtrack.