The SA-805 (referred to as CZ-805 Bren in pre-release and in the game files) is an assault rifle that appears in Call of Duty: Ghosts.

The SA-805 is commonly found on Federation soldiers. It also appears as Logan's starting weapon in the mission "Homecoming" with an ACOG Scope attached. In "Clockwork", Merrick, Keegan, Hesh and Logan Walker also wield SA-805s.

The SA-805 is a cheap assault rifle, costing only 6 points, and is free with the Assault Soldier loadout, equipped by default with a Red Dot Sight and Foregrip.

The SA-805 is a relatively high damage-per-bullet weapon. At any range shorter than 25 meters, the SA-805 will deal 40 damage, resulting in a three shot kill, or a two shot kill where one is a headshot. The SA-805 decreases in damage linearly until a little over 40 meters, where the SA-805 will deal 25 damage, resulting in a four shot kill, a three shot kill where one is a headshot, a two shot kill in Hardcore game modes, or a one headshot kill in Hardcore game modes. The SA-805 loses its three-shot kill ability (without needing headshots) at around 30 meters. This makes the SA-805 a very consistent damage weapon, and one of the deadliest Assault Rifles at longer distances, as its four-shot kill, combined with its healthy rate of fire, make the SA-805 have one of the most satisfactory time-to-kill ratios across all ranges. Headshots will be beneficial at almost any range, as well. Hardcore performance for the SA-805 is also pleasing, having a respectful one-shot kill range, and having an infinite one-headshot kill range. The SA-805 has medium penetration power, allowing the SA-805 to muscle through light cover with ease, but have troubles against thicker surfaces.

The SA-805 also has a relatively high rate of fire, clocking in at 769 RPM. This just puts it over the SC-2010 and the Vector CRB, two very potent weapons in their own right. This enforces the SA-805 as a high damage-per-minute assault rifle, allowing it to hit hard, and fast.

The SA-805 hiccups in the accuracy department. The SA-805 has a rather moderate vertical bias in terms of recoil, alongside some horizontal movement, with gunkick being a large factor as well. The SA-805's iron sights are also a hit-or-miss story, as the chevron sight is very clean, but the rear sight can obscure targets when firing. Accuracy isn't lacking, but less experienced players will definitely have some problems handling the SA-805. It is within best interest to get used to the SA-805's accuracy traits, as they can be tamed even without the help of attachments.

The SA-805 has average handling traits. The SA-805 will move at 90% of the base speed, the hip-fire cone is an acceptable size, and the player will aim down the sight in 300 milliseconds. Hip-fire performance is above average in its class, thanks to its above-average rate of fire, and hard-hitting nature. Reload speeds, however, are longer than some of its peers, taking 2.76 seconds to tactically reload, but can take a more lethargic 3.76 seconds when performing an empty reload. It is within best interest to use Reload Cancel techniques when using the SA-805, as this is one of the SA-805's only weaknesses.

The SA-805 has the standard 30 round magazine for its class. This is taken to 45 rounds when using Extended Mags.

The SA-805's clear-cut advantage is its damage output. With a healthy rate of fire, range, and damage-per-bullet, the SA-805 user won't be wanting too much in terms of damage output, as the SA-805 will almost never fault in the hands of experienced players.

The SA-805's weakness is its accuracy. The SA-805 doesn't have many weaknesses, but its mediocre accuracy certainly stands out, with sub-optimal recoil values and iron sights that can rub users the wrong way. The SA-805 also suffers from a lack of specialty. The SA-805 is a classic jack of all trades, master of none sort of weapon. It has appealing characteristics in short, medium, and long range engagements, but it is never the best option at any one of them.

The SA-805 has the usual assortment of attachments available. If necessary, the SA-805 can take an optical attachment of the player's choice, and if the Assault Soldier was chosen for the player's soldier in question, the Red Dot Sight will be unlocked for it by default. However, more experienced players should probably avoid these attachments, as they prove little to no intangible benefit.

The barrel attachments may prove more useful for the SA-805 user. The Flash Suppressor can be a boon to players that have trouble tracking targets through the muzzle flash, and allows them to retain their original range qualities. The Silencer, on the other hand, will reduce the range by 30%, but will keep the player invisible to the mini-map when firing, and gets the muzzle-flash reduction benefit that the Flash Suppressor gives. The Muzzle Brake is a good option for players that want the utmost damage output from their SA-805, as the SA-805 user can find themselves scoring more three shot kills at ranges where they otherwise would have obtained a four-shot kill.

The underbarrel attachments come with no surprise on the SA-805. The Underbarrel Shotgun can be a viable close quarters defense when the user runs dry and has no secondary, but this will occupy the user's lethal slot. The Grenade Launcher allows the SA-805 to indirectly clear occupied rooms with grenades, which can prove very deadly in tandem with Danger Close. However, users must be aware that Blast Shield users may escape their grasp. As well, the Grenade Launcher occupies the lethal slot, and only has two grenades to use up. The Foregrip doesn't occupy the lethal slot, and helps tame the recoil that the weapon has. This can be invaluable to the SA-805's arsenal, as accuracy isn't the SA-805's strongest suit. More easily directing shots on target can make all the difference between a kill, and death.

The mod attachments may prove more useful to the SA-805 over anything else, because the SA-805 has little specialty, and using the mod attachments can help give it a more specialized role. Armor Piercing can help the user kill armored opponents with extreme ease. The SA-805 is also capable of getting a Semi-Automatic or Burst Fire configuration over fully automatic. Be warned, however: using said attachments will reduce the rate of fire overall, and will increase recoil per shot. To counteract this, the attachments give larger body multipliers, allowing the SA-805 to require less bullets to kill. Extended Mags isn't a complete necessity on the SA-805, but can be a very good attachment nonetheless, as the starting ammunition supply is increased, and allows the SA-805 user to go longer without having to pause for a reload.

In conclusion, the SA-805 is a rough-and-tumble assault rifle that works in nigh-any situation. Across all ranges, performance from the SA-805 is solid all around. However, the lack of a specialty makes the SA-805 lose out to weapons optimized for certain combats that the user is caught in. However, the SA-805 can just as easily wipe out an opponent with a weapon which isn't optimized for said gunfight, such as a sniper up close, or a shotgun user caught in the crossfire. Wherever and whenever the SA-805 is on the field, it can deliver with proper practice, and has little to no faults.

It also appears in Extinction, in Point of Contact, where it can be bought for $2000. It can be found across from the M27-IAR, soon after entering the city.

It is a versatile weapon to use at this point that lacks a real downside besides the below average reload speed, though the M27-IAR could be a better choice due to its increased performance at range and larger ammunition supply, making the M27-IAR more suited to tackling Scorpions at a distance. The SA-805, compared to the M27-IAR, has a significantly lower magazine capacity, but it has higher mobility and a faster reload speed. The SA-805 also faces stiff competition from the AK-12, which is found much earlier, has more ammunition, a larger magazine capacity, a longer reach, and deals more damage up close. The SA-805 is a fine weapon, but one that often gets overlooked by the aforementioned options.

For the attachment images, see SA-805/Attachments. 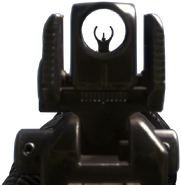