The SAC3 is a submachine gun that appears in Call of Duty: Advanced Warfare. Much like the XMG, the SAC3 is dual-wielded by default, but five single-wielded supply drop variants were added to the game.

The SAC3 is the fifth submachine gun unlocked in Multiplayer.

The SAC3 has many shortcomings, the first and foremost of which are its low fire rate, combined with its low hipfire accuracy. In many a gunfight, a player will not land enough shots on the enemy in order to end. As such, the Laser Sight and Rapid Fire are strongly recommended in order to boost its effectiveness at close range. These attachments can strongly boost its versatility and effectiveness at all ranges, although using at ranges past medium is still ill-advised.

Building a class around the SAC3 is more difficult than it is to do with most guns. Being Akimbo by default, Lightweight, Gung-Ho, and Fast Hands are recommended in order to make up for the disadvantage of not being able to aim. With the above perks, the user can outmaneuver most enemies and stay on the move, in order to avoid being pinned down. Because of its relatively low reserve ammo of only one extra mag per gun, Scavenger is a good choice for prolonged use.

The single-wielded variants share the same base stats as the default dual-wield ones, but have double the fire rate to make up. All of them have an integrated Red Dot Sight in the first attachment slot. The other attachments available are the same as the dual-wield variants, and it cannot utilize attachments that other single SMGs have, such as grips or other optics.

In conclusion, the SAC3 is a weapon with unique handling, but can prove effective when used properly.

The SAC3 has some good variants to use. The Rapid increases the fire rate of both guns to 666 RPM, making the weapon more effective as the damage-per-second is higher. However, the player will move at 98% of the base movement speed while holding the SAC3 Rapid. This is a negligible effect, and could be easily countered with Lightweight and/or Exo Overclock.

The JK variant increases the minmum damage to 20, giving the weapon an infinite five-hit kill radius. However, the medium damage range is reduced to 26 meters. This disadvantage has no effect on the weapon whatsoever, due to the medium and minimum damage being both 20. The advantage granted by the SAC3 JK is questionable as due to the Akimbo nature of the weapon, the player is unlikely to need more damage beyond 30.6 meters. However, the JK is an effective variant simply because it has no drawback whatsoever.

The Fire & Brimstone has a large damage increase, increasing the medium damage to 25 and the minimum damage to 20. This in turn makes each gun a four-hit kill out of 30 meters and a five-hit kill at any longer range, making the weapon far more effective for medium range fights. However, the Fire & Brimstone has a heavy drawback of reduced fire rate, a low 500 RPM per gun. Rapid Fire is an important attachment to consider to counter the lower fire rate, decreasing the damage-per-second.

The Misery & Company, like the Rapid, increases each gun's fire rate to 666 RPM, and allows the player to move at 102% of the base movement speed while holding the weapon. However, the Misery & Company has a 10% wider hip-fire cone, and decreases the magazine capacity from 32 to 28 rounds. The Laser Sight is important to counter the loss of hip-fire accuracy, although the magazine capacity decrease is usually not problematic.

The Introvert (which is a single-wielded variant) is an interesting variant to use. It has many similarities to the MP11 Squeaker, most notably, it an extremely high rate of fire at 1200 RPM which is also the exact same rate of fire that the MP11 Squeaker has, making it extremely deadly at close range. However, its viewkick is increased by 20% and this is further emphasized by its high rate of fire, making it hard to hit targets at longer ranges. The high rate of fire also means that even with Extended Mags, the player will burn through their magazine very quickly, making reloads very frequent. Putting Rapid Fire on the Introvert will give the same result as with the MP11 Squeaker, it will move the rate of fire up to somewhere around 1400-1500 RPM and the recoil will become almost unbearable. Along with that, the player will also burn through their magazine even faster, making Rapid Fire a very risky attachment to use and it should preferably not be used without proper skill. The Introvert also comes with an integrated Red Dot Sight, just like the MP11 Squeaker.

The SAC3 also appears in Exo Survival. It costs 3 unlock points to buy, and is unlocked at round 19.

As a weapon that has Akimbo integrated by default, it has low hipfire accuracy and the disadvantage that it cannot be aimed, though this can be remedied through buying the Laser Sight for it. Despite those drawbacks, it has a high magazine capacity when both weapons' magazine capacities are combined, though it also comes with a low rate of fire, which can also be a problem. With these statistics, it is most effective in close-quarters situations or when running around a lot.

If the player still wants a high magazine capacity but doesn't want to be forced to use Akimbo, the KF5 is a good choice as it has the next highest magazine capacity of the submachine guns, at 40 rounds per magazine and 60 with Extended Mags.

The SAC3 appears in Exo Zombies. It is available via the 3D Printer.

Being dual wielded, the SAC3 is very effective against groups of zombies. The high magazine capacity and the relatively short reload time are also major advantages. However, the reserve ammo is rather low, and may leave the player dependent on Full Reload or their other weapon after one or two rounds. A fully-upgraded SAC3 is very powerful, being able to easily clear hordes of zombies but it still retains the problem of having a rather small ammunition reserve.

It receives a Laser Sight at Mk 4 upgrade, Rapid Fire at Mk 7 and Extended Mags at Mk 10.

The SAC3 in first person 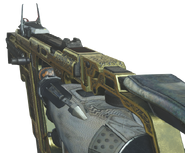 One of the single-wielded variants, the Isolated

An operator wielding the SAC3

Concept art of the SAC3; note the different barrel and the Thunder & Lightning style gas block above it. It was misidentified as the AMR9.