For the killstreak reward in Black Ops and Modern Warfare 3, see SAM Turret.

SAM sites are seen in Shock and Awe, trying to shoot the US Marines' helicopters down. They are destroyed by Paul Jackson.

SAM sites take a bigger role in this game. They are introduced in The Only Easy Day... Was Yesterday, where they must be taken down before Task Force 141 can move on to the The Gulag. They are also seen in Of Their Own Accord, where the Rangers have to destroy them so evacuating forces can safely move in the airspace. 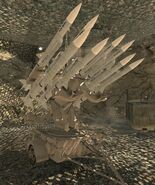 SAM sites are seen in Payback, where they try to shoot down the Hind captured by Woods and Mason.

David Mason uses a SAM in "Cordis Die" to take down incoming drones that threaten the President; it is also seen in "Judgment Day". It is a controllable anti-air ground-to-air missile launcher with an unlimited lock-on limit.

Interface.
Add a photo to this gallery

Retrieved from "https://callofduty.fandom.com/wiki/SAM?oldid=2342037"
Community content is available under CC-BY-SA unless otherwise noted.