For a general overview on SAM Turrets, see SAM.

The SAM Turret is an unmanned weapon which automatically locks onto any aircraft killstreaks and fires missiles to destroy them. The turret is capable of taking out nearly any airborne killstreak (exceptions include the Stealth Bomber and Blackbird). However, the SAM Turret has a limited amount of missiles and is completely defenseless against ground targets. The SAM Turret will fire at aircraft from any location it's placed, even if it means firing at a wall.

1600
The SAM turret can shoot down all enemy airborne killstreaks, including Valkyrie Rockets, but not the Blackbird. Airstrike-class killstreaks such as Napalm Strike and Rolling Thunder can't be shot down.

Like the Sentry Gun, this killstreak must be called in by airdrop before placing it. As such, users must be careful when calling in a SAM Turret, as the user will become a high priority target while awaiting for the SAM Turret to be dropped. Like any other air drop, it can be taken by teammates, as well as taken by the enemy team, and even booby trapped. Unlike the Care Package, players cannot re-roll the SAM Turret package's contents if they have Hardline Pro.

The SAM turret only fires a limited number of missiles, and then self-destructs. The player can only place two SAM turrets at once, as placing a third turret will destroy the first one. Like the Sentry Gun, the SAM turret can be destroyed by the enemy team, as well as hacked. Combined with needing to be placed in a position where it can get a clean shot on aerial killstreaks, proper SAM Turret placement is vital to getting the most out of it, and in certain situations, it'd be wise to hold off on deploying the SAM Turret until the player finds a position they truly like.

The SAM turret picks its targets based on how long they've been active, not by how dangerous they are. For instance, a SAM Turret would first destroy a Spy Plane that's been active for 20 seconds then attack a Gunship that has been up for 10 seconds. The rocket from it travels fast, even faster than the Valkyrie Rocket. One knife slash will destroy it. SAM turrets last 1 minute and 30 seconds - three times the time of Counter Spy Planes. The SAM Turret will wait until the Spy Plane scans the map one time before firing a missile at it.

The SAM Turret has the potential to kill players in highly unlikely scenarios, much like the Strela-3. First, the SAM Turret missile, if diverted by a flare, could potentially be redirected into the playing area and explode. The other potential scenario is if an enemy jumps in front of the SAM Turret missile as it is firing, allowing the missile to directly hit the enemy and kill them. Users should not expect to get any kills from the SAM Turret.

SAM turret on the killstreak selection menu in Call of Duty: Black Ops.

SAM Turret within a Supply Drop.

8
The SAM Turret returns in Call of Duty: Modern Warfare 3 as an 8-point Support Strike package pointstreak. It takes a few seconds to automatically lock on to enemy air support and fires a salvo of four surface-to-air missiles at it. The missiles can trigger flares and be diverted. The missiles launched by the turret are significantly weaker than those fired by the turret in Black Ops, requiring all four to hit a simple UAV or counter UAV to destroy it; other pointstreaks, such as helicopters, will require over four missile hits to be destroyed. This is somewhat balanced by the turret's ability to fire a seemingly unlimited amount of missile salvos at air support.

Unlike in Black Ops, it does not need to be airdropped in and can be deployed as soon as the player earns it. Destroying an enemy SAM Turret also adds a point to a player's pointstreak.

Placing it in an open area is recommended, as many buildings and/or structures have a tendency to block the SAM Turret's missiles, though this could lead to it being destroyed by enemies more quickly.

The SAM Turret as it appears in MW3.

The SAM Turret in Modern Warfare 3. Note the faction icon.

The SAM Turret firing on an enemy Hind.

A SAM turret in MW3

An unused killstreak icon for the SAM turret in MW3.

A SAM Turret engaging a UAV

The SAM Turret was cut from Call of Duty: Ghosts, but audio files remain for it.[1]

The SAM Turret reappears in Call of Duty: Heroes. It can be built at a Level 1 Command Center.

The SAM Turret as it appears in game.

"The SAM Turret is an unmanned weapon which automaticaly locks onto any aircraft scorestreaks and fires missiles to destroy them."
— Description

The SAM Turret returns in Call of Duty: Mobile as a scorestreak.

The SAM Turret returns in Call of Duty: Black Ops Cold War as a Field Upgrade. 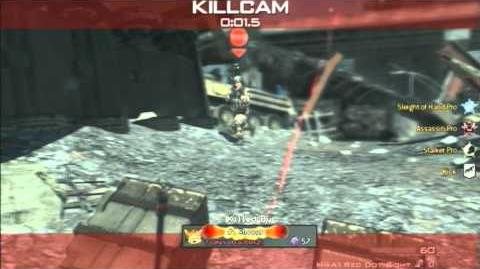 Modern Warfare 3 SAM Turrets are deadly too
A SAM Turret killing a player.