The SATO Coast Guard is a division of SATO responsible for maintaining security within UNSA territory. They are responsible for guarding the Lunar Gateway as well as the Europa black site. During the one-day long war between UNSA and the SDF they suffered heavy casualties, possibly numbering in the thousands, as numerous dead bodies wearing the uniform of the Coast Guard are seen strewn around the floors in the missions "Rising Threat" and "Operation Port Armor". They also have a small number of Jackal fighters, most of which were possibly destroyed during the said conflict.

During the conflict, most members of Coast Guard stationed on Luna appeared to have been drawn from the United States and Germany judging by the patches on their uniforms. 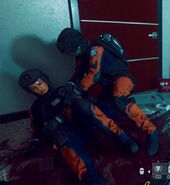 Add a photo to this gallery
Retrieved from "https://callofduty.fandom.com/wiki/SATO_Coast_Guard?oldid=2518548"
Community content is available under CC-BY-SA unless otherwise noted.