The SAT COM is a 3-point streak (4-point in Support) featured in Call of Duty: Ghosts. It acts similarly to the UAV from previous titles, causing enemies to show up as a dot on the radar. Unlike the UAV, the SAT COM is a deployable ground equipment rather than an aircraft. In team games, the number of friendly SAT COMs present on the map determine their combined effectiveness:

In Free-For-All, the SAT COM functions similarly to the single UAV from previous games.

The SAT COM can be destroyed through shooting or knifing (players have to crouch over it because it is very small). Wiretap allows the player to access enemy SAT COMs as if they were their own.

Uniquely on the map Whiteout, if one earns the Satellite Crash Field Order reward, the crashed satellite will act as a single SAT COM for the rest of the game. Its effects will stack with other SAT COMs present on the map throughout the game after it is called in. 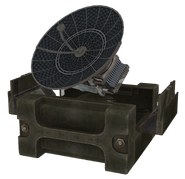 Render of the SAT COM.

The SAT COM being deployed on the multiplayer map Whiteout.

When obtaining the Pointstreak in Call of Duty: Ghosts multiplayer.